YANTRAS: WHAT IS THEIR PURPOSE

Yantras are generally geological designs imprinted on a copper or silver plate. These days we also see them in multi-colored inks on paper. Among the sacred symbols manifested by the Vedic Rishis, yantras are predominantly regarded as devices for devotional sadhanas or practices, and as objects to direct our mind and worship. These are used as tools for mental concentration and meditation. Keeping a specific yantra in a particular direction in the home, and worshiping it and concentrating upon it is said to have distinct auspicious effects. A mantra is the generator of specific currents of sublime sound and its perceivable manifestation; a yantra is a monogram - a spectrograph of this sonic energy. In terms of their spiritual effects, yantras are like schematic sketches of the contours or structures of divine energy fields. 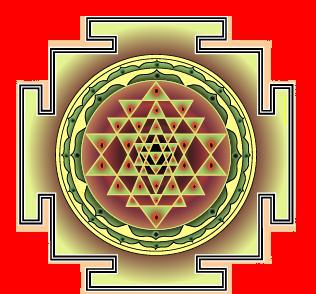 Likewise the images of gods in the temples, yantras are revered and worshiped as symbols of divine powers. The Devi Bhagavat (3|26|21) states - Archabhave Tatha Yantram; meaning - a yantra symbolizes a divine power. Similar meanings are indicated in Naradiya Purana, Gautamiya Tantra, Yogini Tantra, and several other Vedic scriptures.

Yantras are also referred as the abodes of the divine powers of God, or of the deity that it represents. This is why most of the Vedic yantras are named after different divinities, such as, Ganesa-yantra, Sri-yantra, Gopala-yantra, etc. Each yantra needs to be installed with the use of particular mantras, similar to the temple installation of a deity. Which yantra is placed in which direction and how its worship and devotional sadhana is to be performed - the knowledge of these constitutes a science in itself that has linkage with the Vedic cosmology and sciences of mantra, Tantra, and Vastu.

A dot (.) in the cryptography of yantra symbolizes absoluteness, completeness. In terms of the manifestation of Nature in the universe, it is a symbol of the nucleus of cosmic energy and hence represents the power-source of all activities and motion. Its spiritual implication is pure knowledge, enlightenment, and ultimate realization. The expansions of a dot in circular forms, in a yantra, symbolize related expressions in varied forms. Combining the dots results in a triangle. Different lengths of the straight lines joining the dots, different angles between them, and the different triangular and other shapes generated thereby together with free dots, circles, straight, curvilinear, convergent, and divergent lines are the basic features/components of the structure of a yantra.

Everything that exists in the cosmos has some size and structure - perceivable or conceptualized - in subliminal, astronomical or intermediate dimensions. Even the invisible subtle entities have 'shapes' which could be 'seen' through mental eyes. The sagacious minds of the Vedic Age had deeper insight to 'see' the invisible or sublime elements of nature and express them in a universal language of symbols. They had thus invented a coding system of symbols, signs and alphabets (including digits) to represent the syllables of the seed mantras associated with the sublime fields of divine powers (devatas), natural tendencies of consciousness, emotional impulses in a being, etc; and the five basic elements (pancha-tatvas), their etheric vibrations and energy fields, and the states and motions of the enormous varieties of sub-atomic, atomic, and molecular structures generated thereby. Specific configurations of these codes were then incorporated in different yantras. Thus, by meditating on the yantras, and using particular mantras to invoke their potencies, would also awake higher powers within the mind and consciousness of the sadhaka, or practitioner, if done properly.

A brief description of some of the popular yantras is given below. 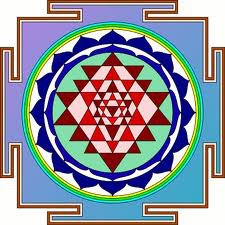 Shri Yantra: Through this yantra one attains the favor of Lakshmi and is never short of money. By reciting Lakshmi prayers to it everyday, one attains all benefits. Though there are many kinds of color variations those who are artistic like to make to the Sri Yantra, the best kind of Sri Yantra on which to meditate are those that are simply composed of the black and white lines, which enunciates the triangles in the yantra the best.

Baglamukhi Yantra: This is to overcome enemies or obstacles and gain favorable verdicts in legal cases.

Bisa Yantra: God helps those who have the Bisa yantra in all endeavors. All difficult things become easy. By praying to it every morning obstacles are overcome and one attains success and honor.

Shri Kanakdhara Yantra: It helps in attaining wealth and dispelling poverty and ensures many blessings.

Shri Mahalakshmi Yantra: With prayers to this yantra one is assured of perpetual prosperity.

Surya Yantra: It promotes good health and well-being, protects one from diseases and promotes intellect.

Panchadashi Yantra: This yantra has the blessings of Lord Shiva and ensures morality, wealth, family happiness, and salvation.

Of all yantras the one that brings results the most quickly is the Shri yantra. With successful prayer and offerings, all the four basic human pursuits are attained, such as dharma - discharge of duty, artha - acquirement of wealth, kama - gratification and moksha - final emancipation. The Vedas say that 33 crore gods and goddesses reside in the Shri yantra. This yantra can also eliminate Vaastu shortcomings. The origin and development of the universe is depicted in this yantra.

The Durga Saptshati says: With worship the primordial power gives happiness, enjoyment, and pleasures of heaven.

Mahatripura Sundari has been referred to in religious texts with names like Vidya (knowledge), Maha Vidya (best knowledge) and Param Vidya (ultimate knowledge).

There is a story about the effectiveness of the Shri yantra. Once, unhappy with her visit to earth, Ma Lakshmi returned home to Vaikuntha. Due to her absence, many problems emerged on earth. Maharishi Vasishtha sought the help of Lord Vishnu to pacify Ma Lakshmi, without success. Then Devaguru Brihaspati explained that the best way to attract Lakshmi to the earth was through the Shri yantra. With worship of the Shri yantra, Ma Lakshmi immediately returned to earth and said, "Shri yantra is my foundation. My soul resides in it. Therefore, I had to return."

Worship to Shri yantra after pran pratishtha ensures happiness and liberation. The best occasions to establish a Shri yantra are Diwali, Dhanteras (two days before Diwali), Dashera, Akshay Tritiya (the third day of the lunar fortnight) and Pratipada (the first day of the lunar fortnight) and other auspicious days. At the time of worship one must face the east and pray with devotion and concentration.

Here are two versions of the Sri Yantra: 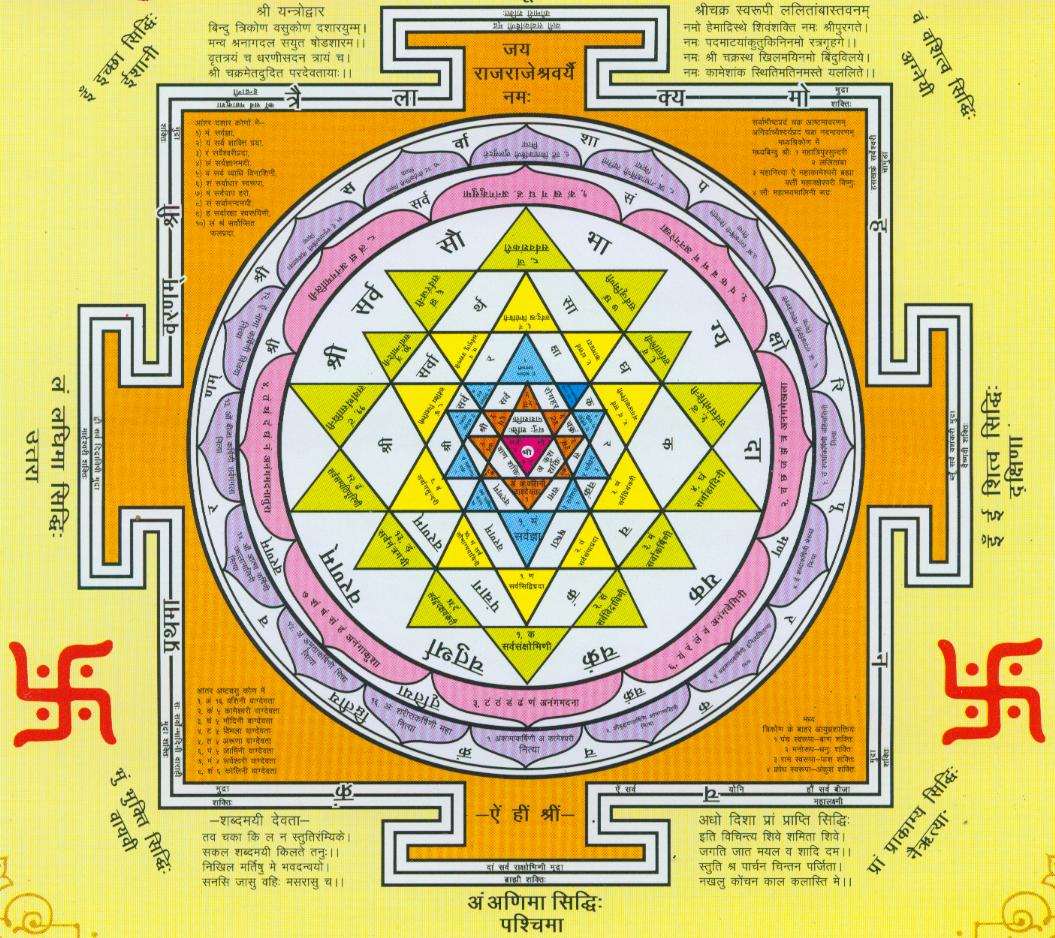 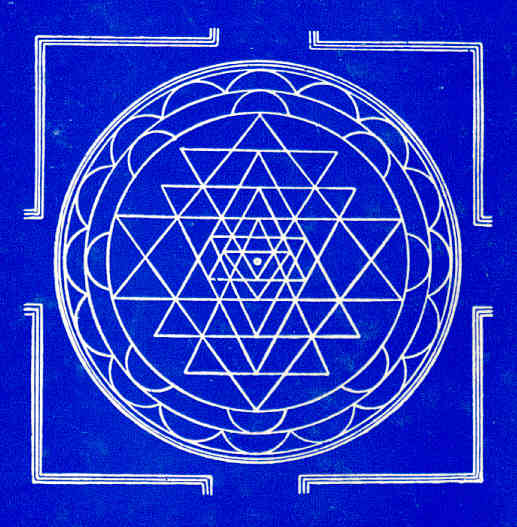 Two examples of the Sri Yantra 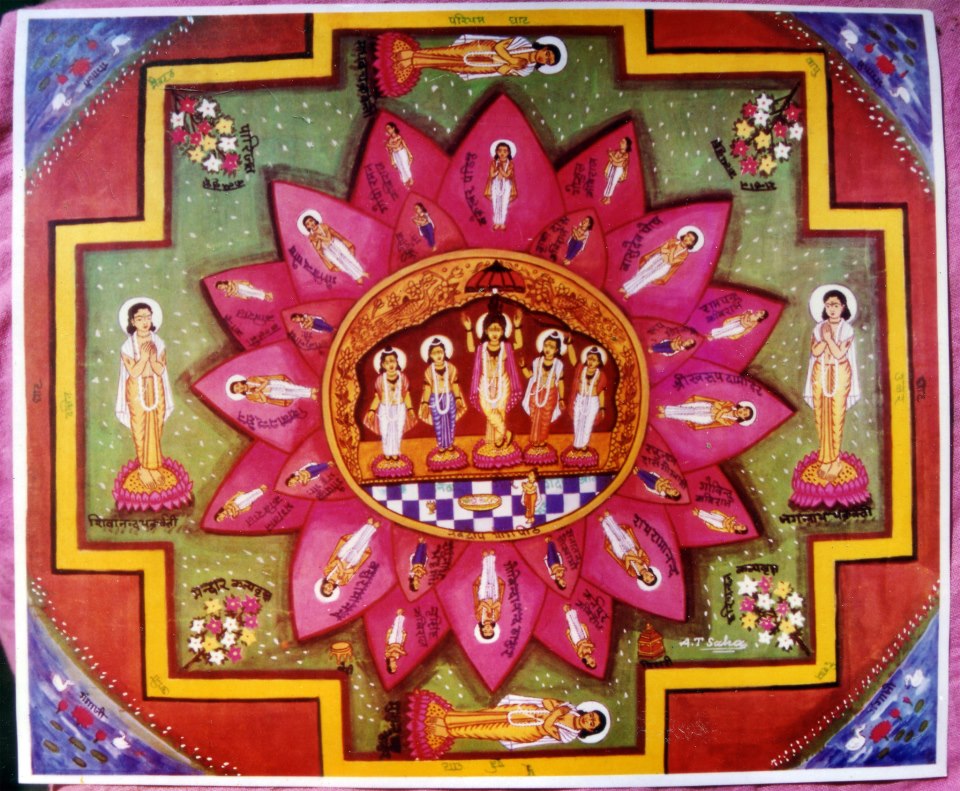 Above is the Pancha Tattva Yantra, with Sri Chaitanya and His four associates.