This is the holy Yamuna river winding its way around some of the old buildings and temples at Keshi Ghat at Vrindavana. It is near the place where Krishna sported in the Yamuna 5,000 years ago, making it one of the holiest places in the area. 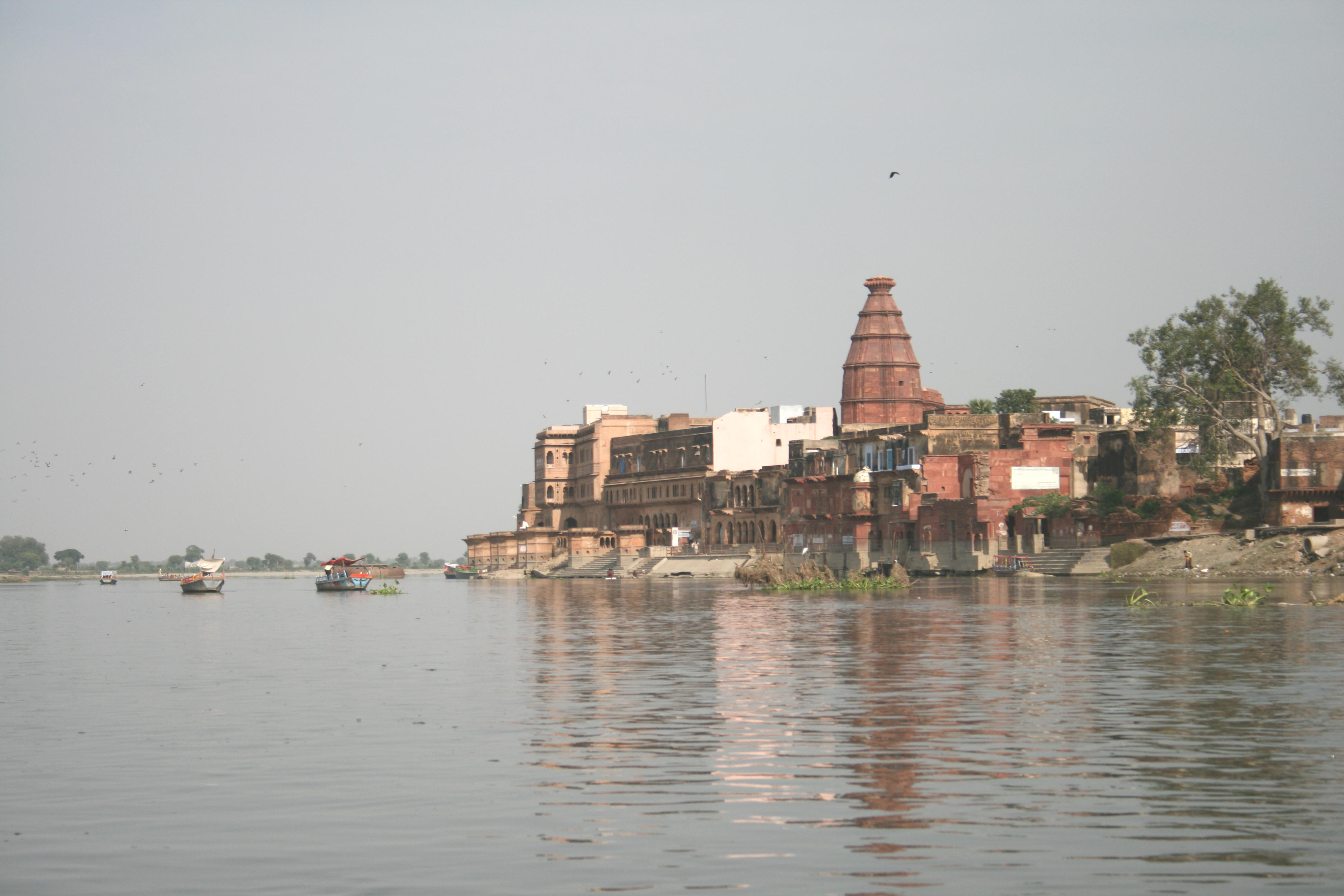 Vrindavana has many places to visit in relation to the pastimes of Lord Krishna. And each temple has worship going on to the Deities of Krishna and His associates, such as His topmost devotee, Radharani, to His left, as shown in the photo below. 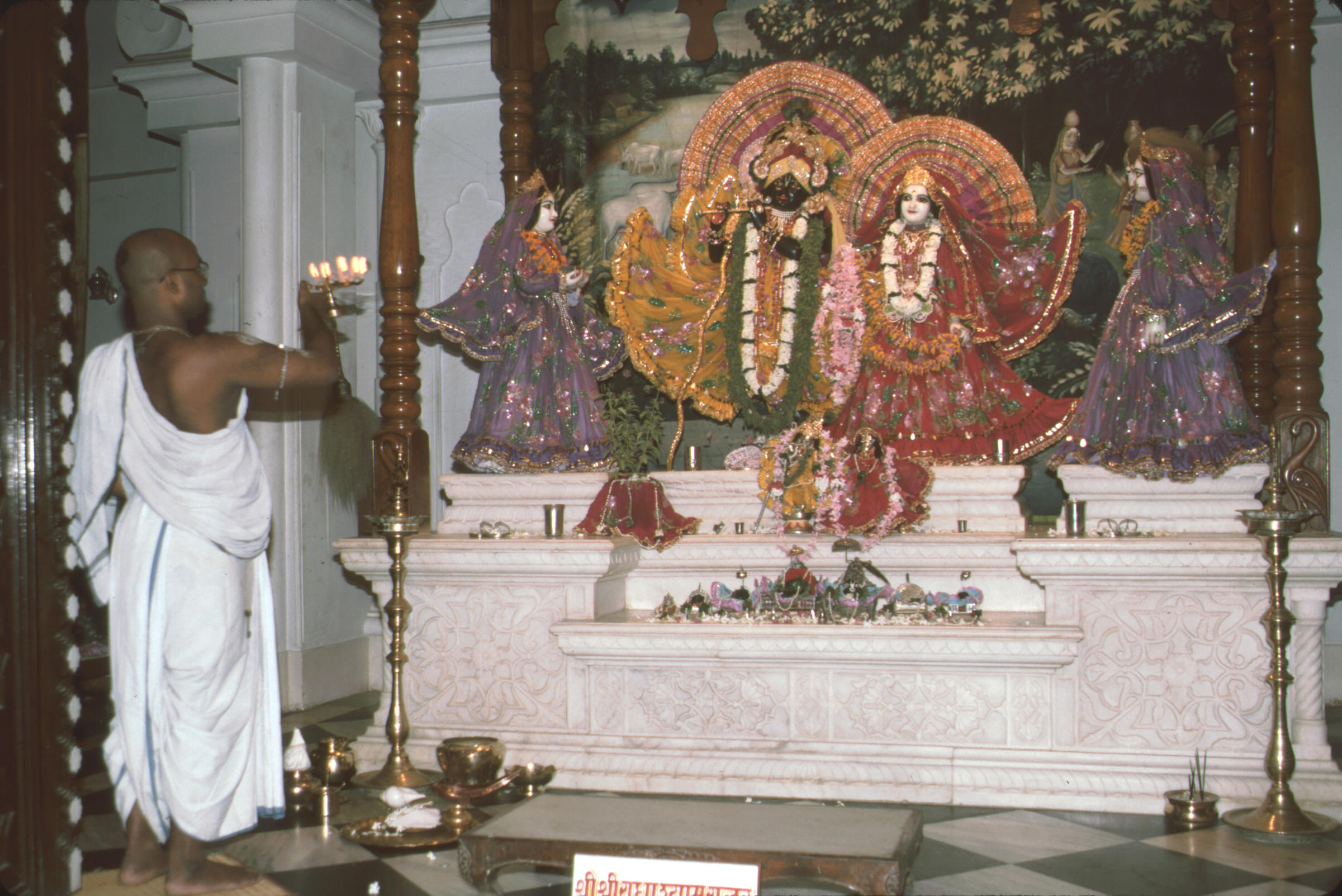 There are also plenty of festivals to see in India, such as at the holy place of Jagannatha Puri. Below is a photo of the Jagannatha temple where many Hindus visit the huge five fee tall Deities of Lord Jagannatha (Krishna), Lord Balarama (Krishna's brother), and Lady Subhadra (Krishna's sister). Though you have to be born a Hindu to be allowed entrance into the temple, during the Rathayatra festival every summer the Deities come out for everyone's view. 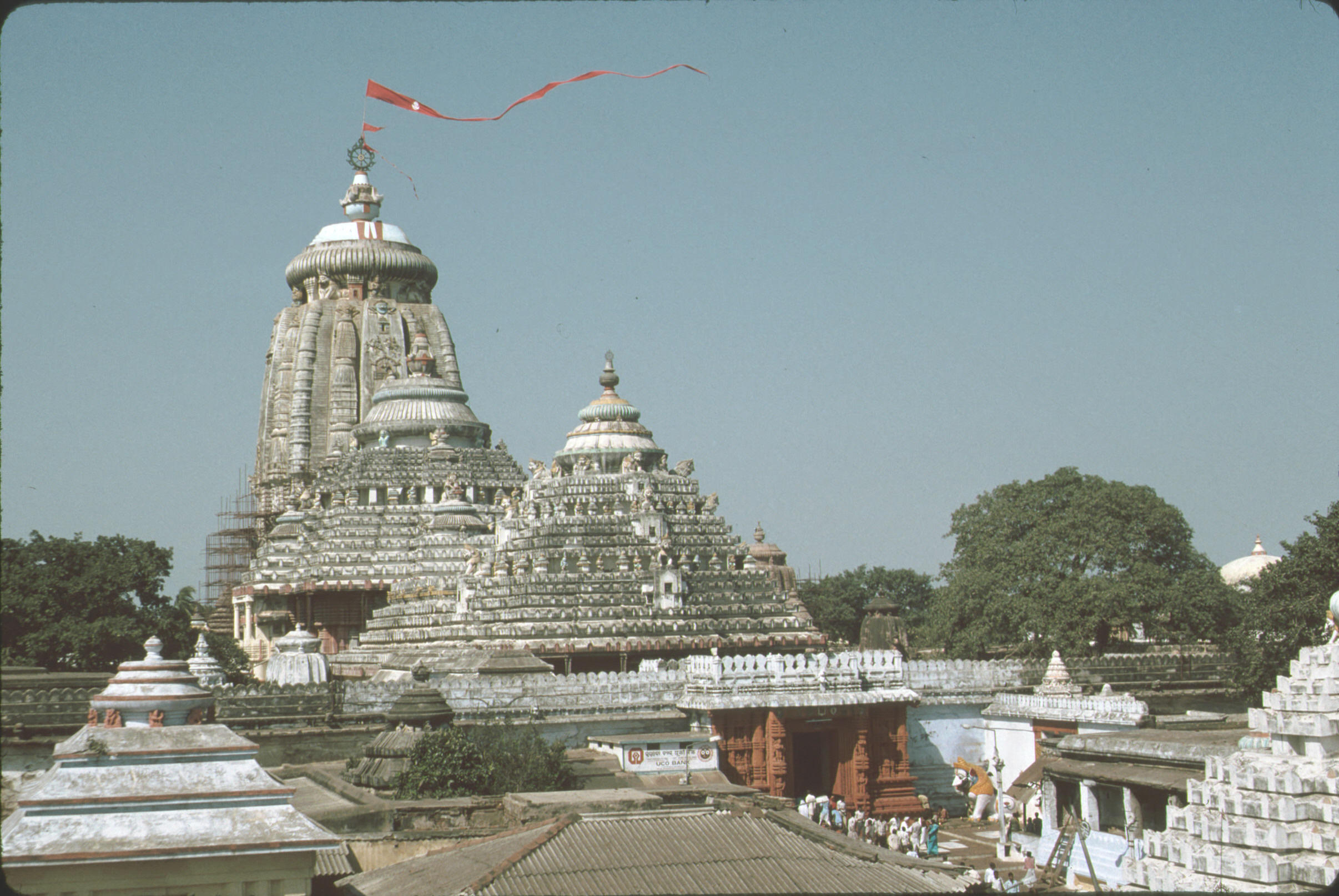 The Deities come out of the temple to ride on these huge carts down the street of Puri to the Gundicha temple, where They will stay for five days and then return. It takes several weeks for the carts to be made, as we can see while they are under construction just outside the main temple. 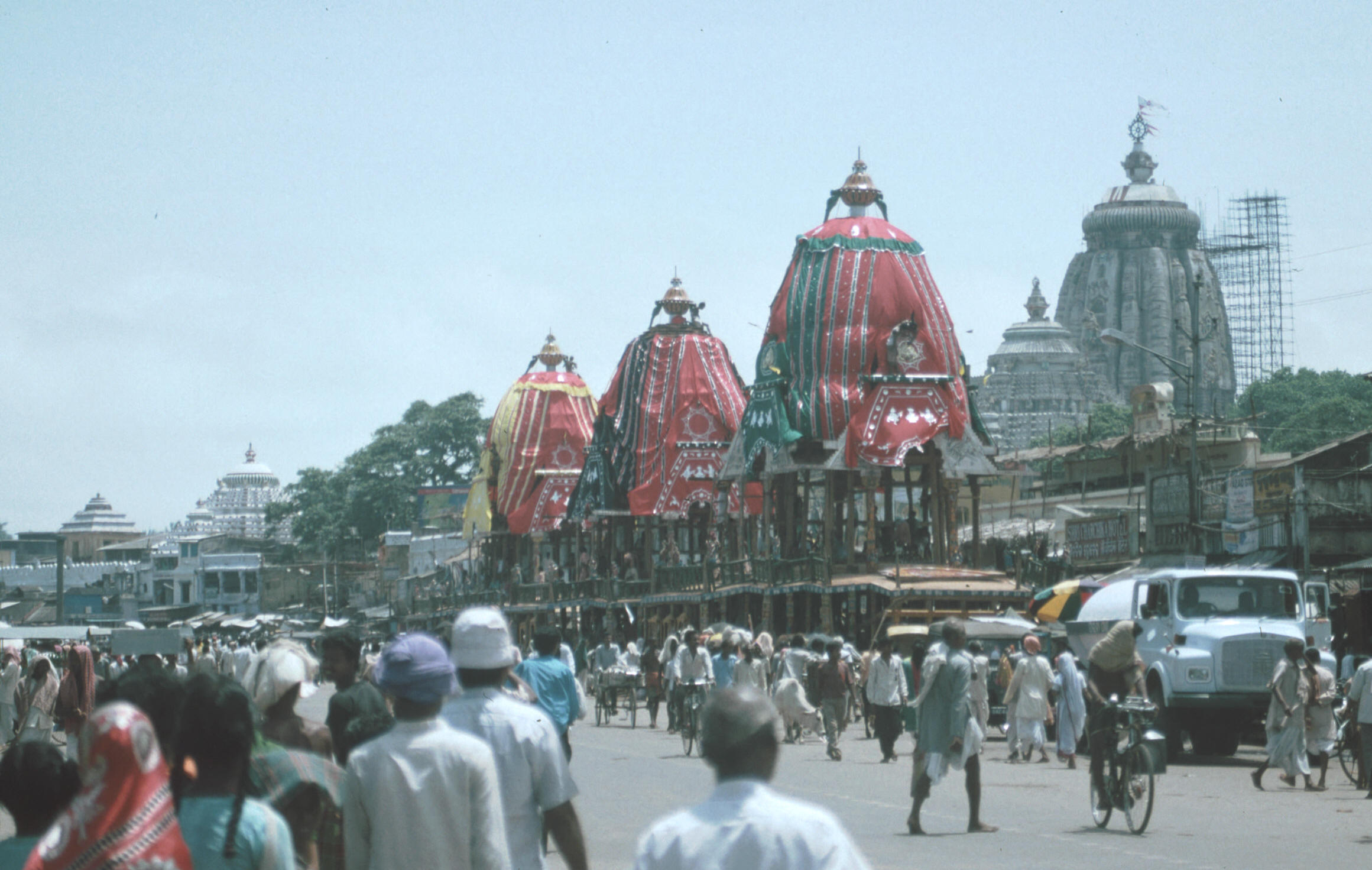 There are thousands of pilgrims and devotees who arrive to participate in this festival. They help pull the ropes to move the carts on which sit the Deities. Some of the lucky assistants get to ride directly on the carts, as shown on the right. Here they are celebrating in a grand way. 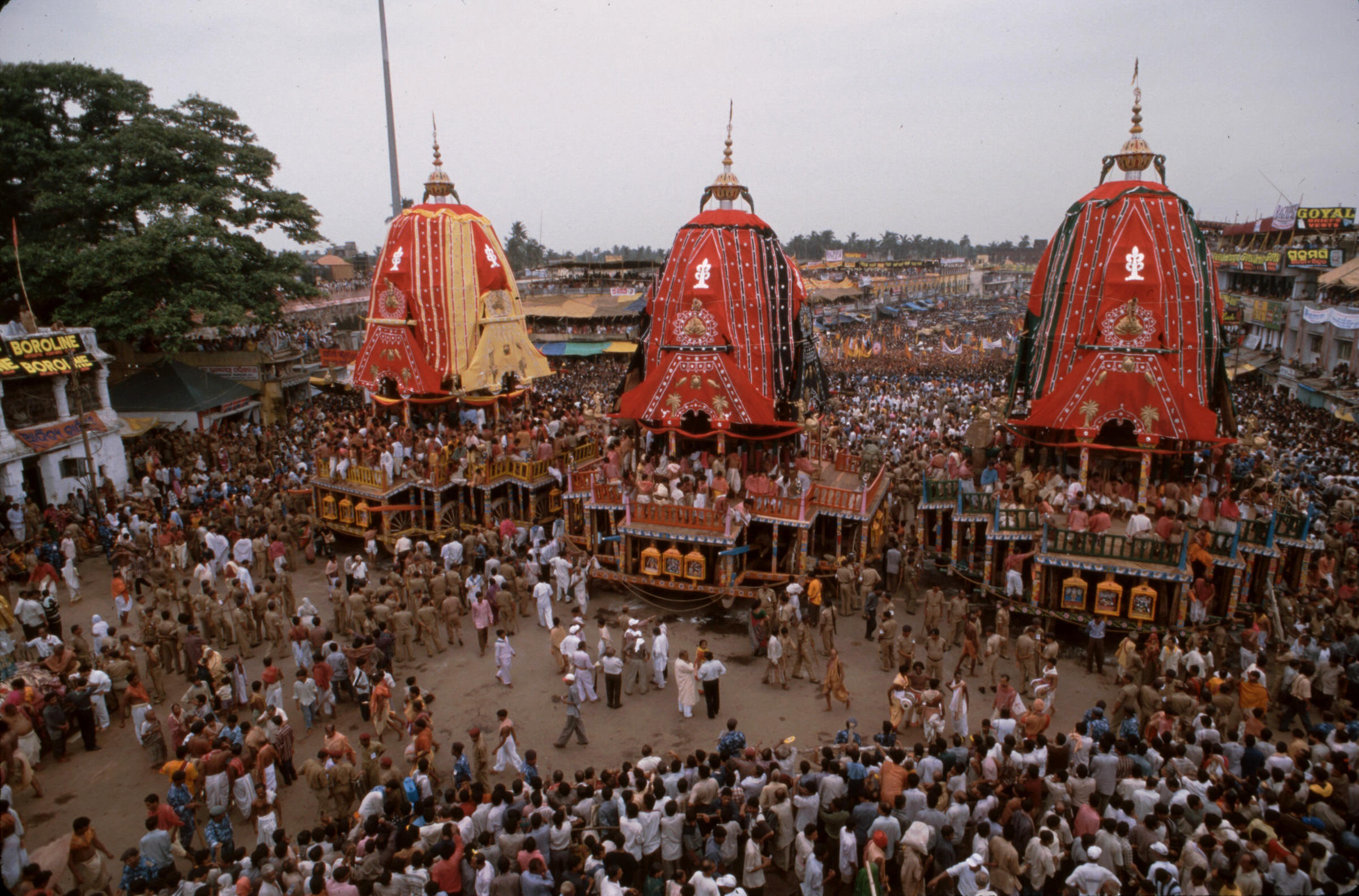 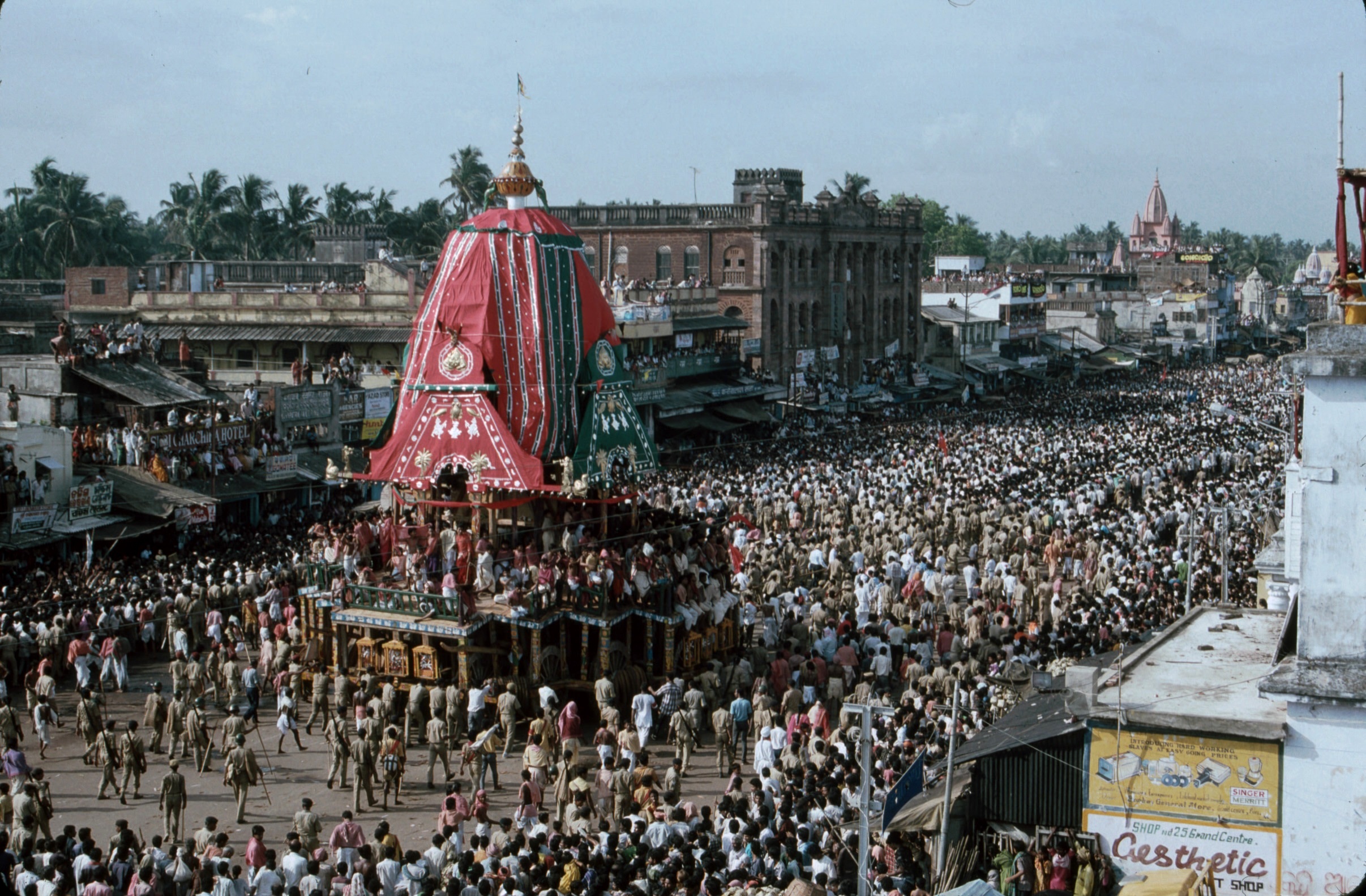 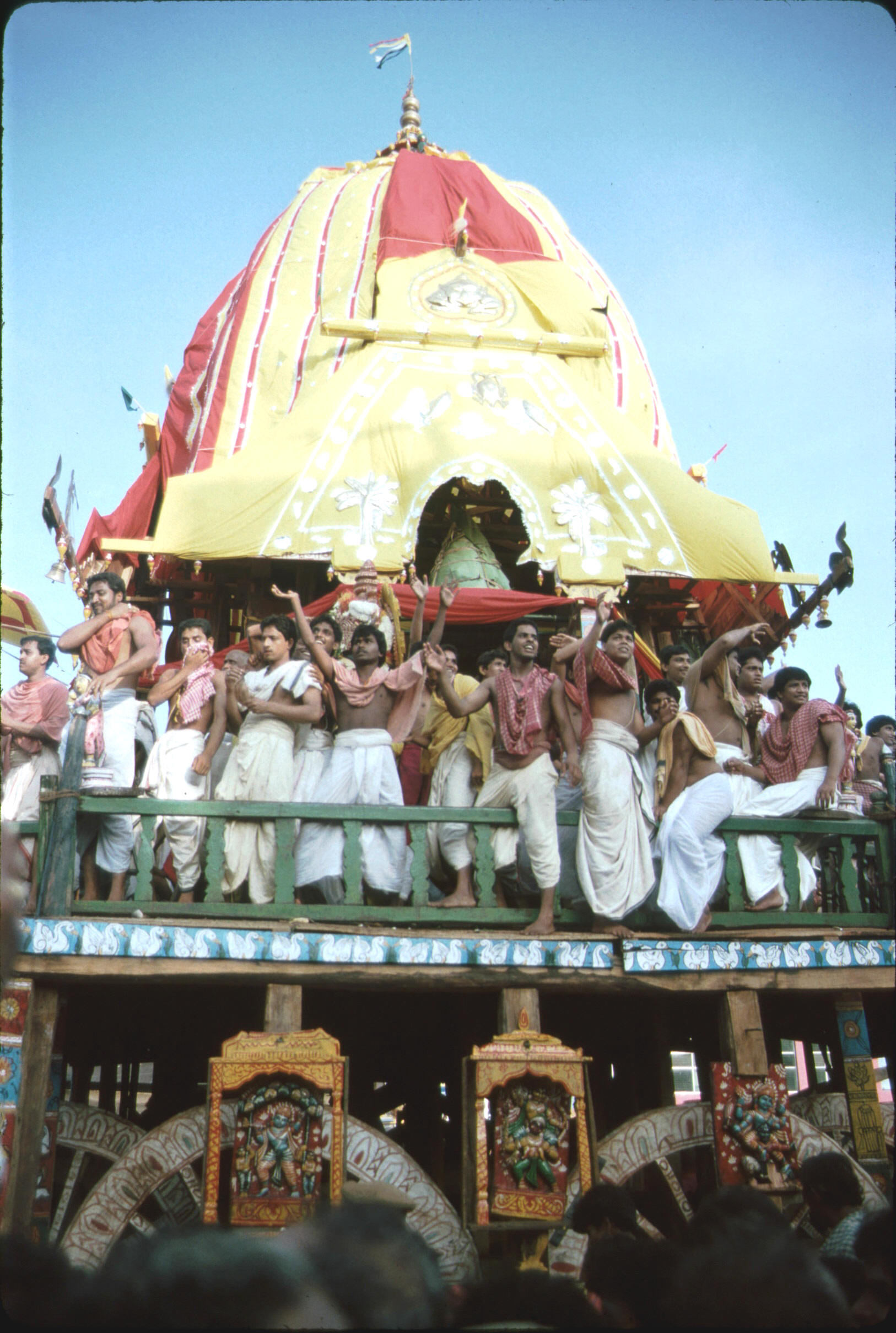 Here is the Gaudiya temple that marks the birthplace of Lord Caitanya in the holy place of  Mayapur, India. The temple is a lovely place, and within the courtyard is the hut and the Nim tree under which Lord Caitanya was born, as viewed in the next photo. 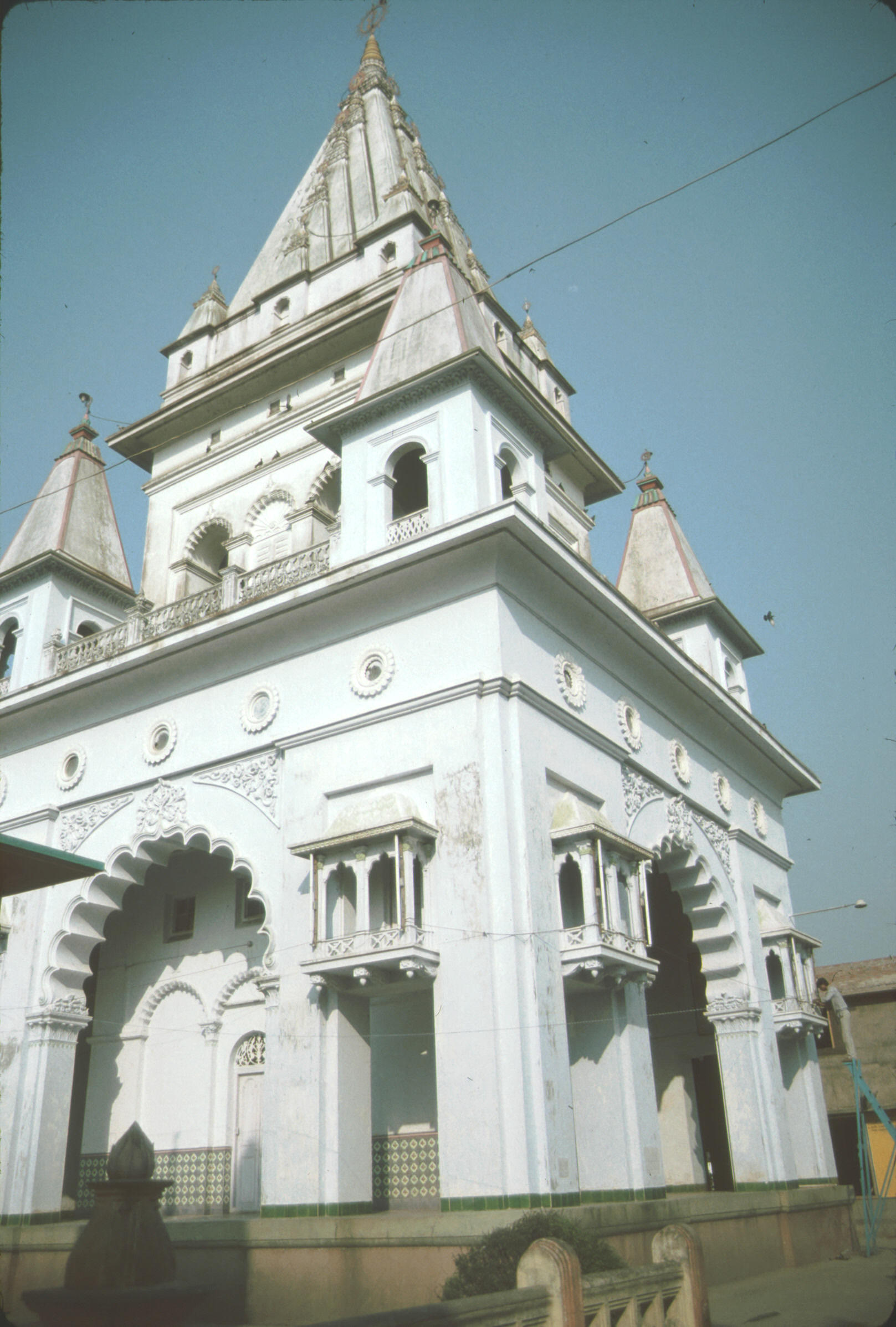 Below is a photograph of a tree, but not just any tree. It is the Caitanyajanmasthan, or the Nim tree under which is the hut where Lord Caitanya was born  a little over 500 years ago. It was this tree that gave reason for why He was called Nimai. You can find out more about Lord Caitanya in my article about Him. 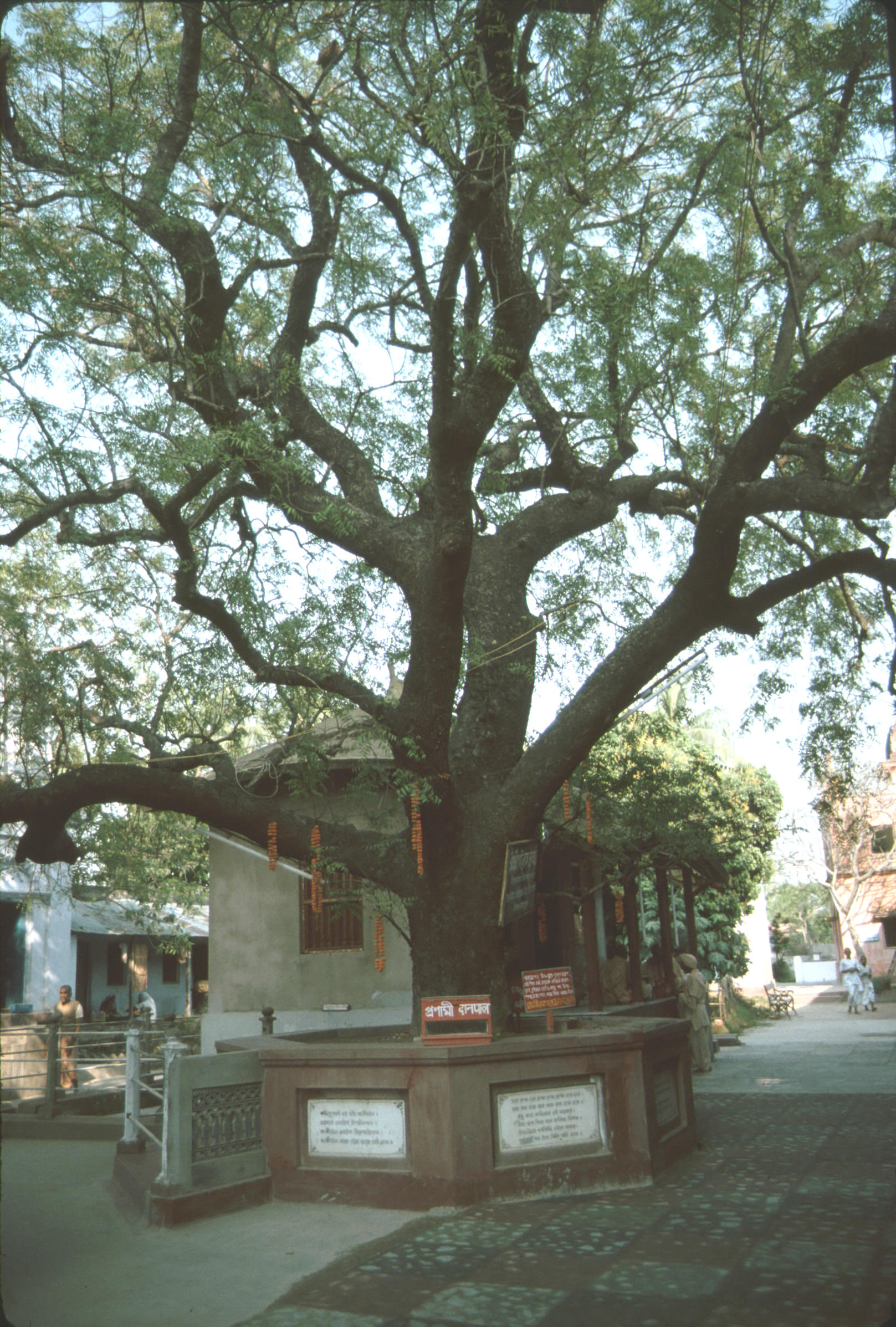 Below is the close up view of the hut under the Nim tree which shows baby Nimai (Lord Chaitanya) on the lap of His mother Sacidevi, and next to His father. 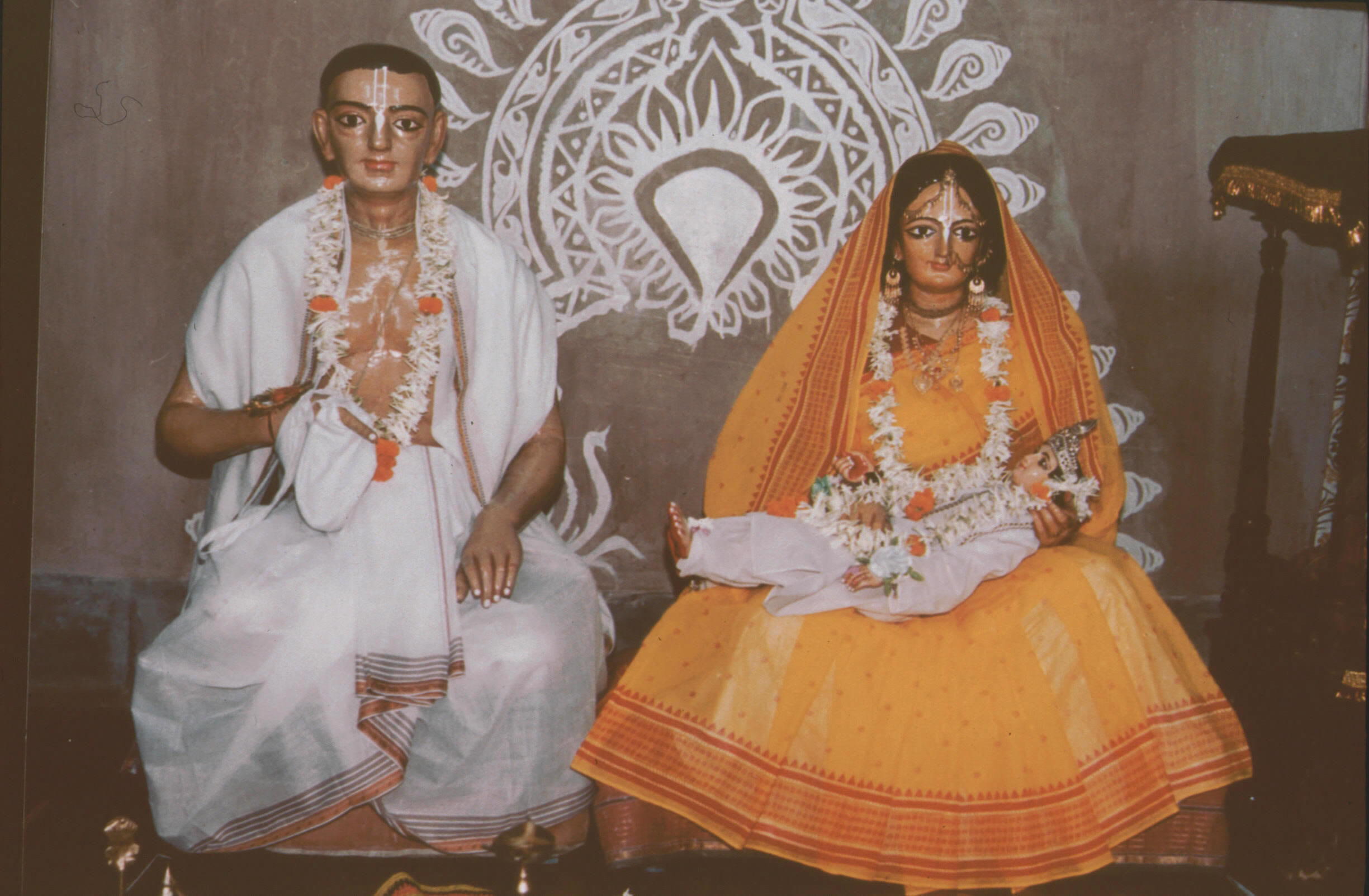 The Mayapur and Navadvipa area abounds with temples. And here is the Deity of Lord Chaitanya located in a temple in Navadvipa which was worshiped by Vishnupriya Devi, Lord Chaitanya's wife (Lakshmi) after He left and took sannyasa to continue His preaching. 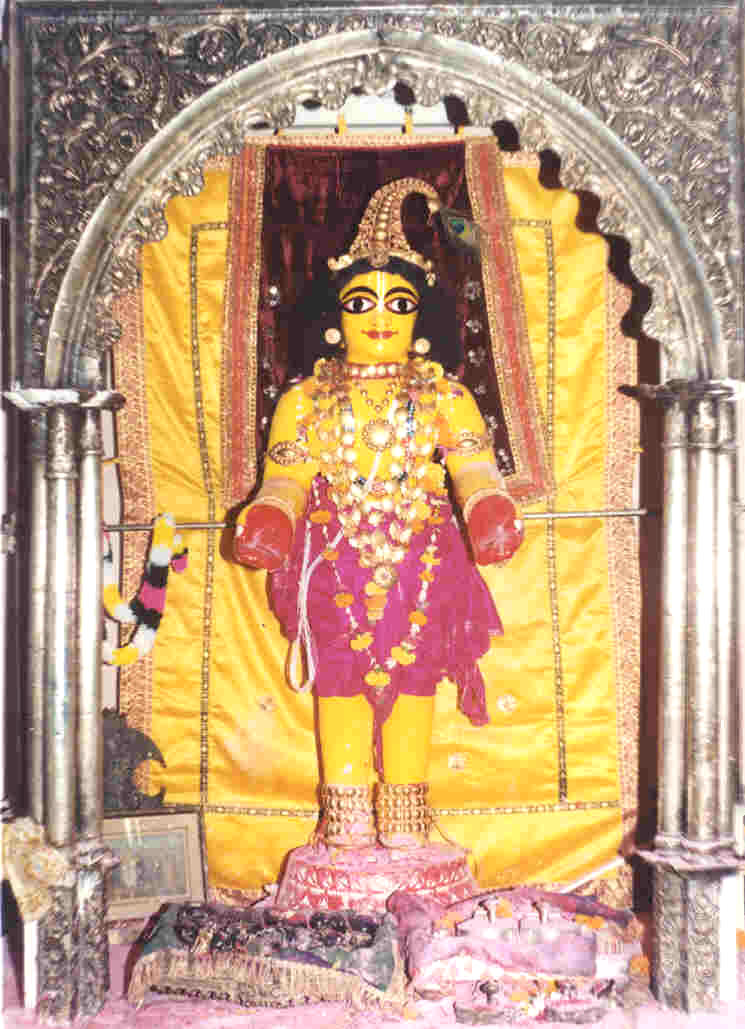 Below is the Iskcon Mayapur Chandrodaya Mandir, the largest devotional temple complex in Bengal in the holy place of Mayapur, India. 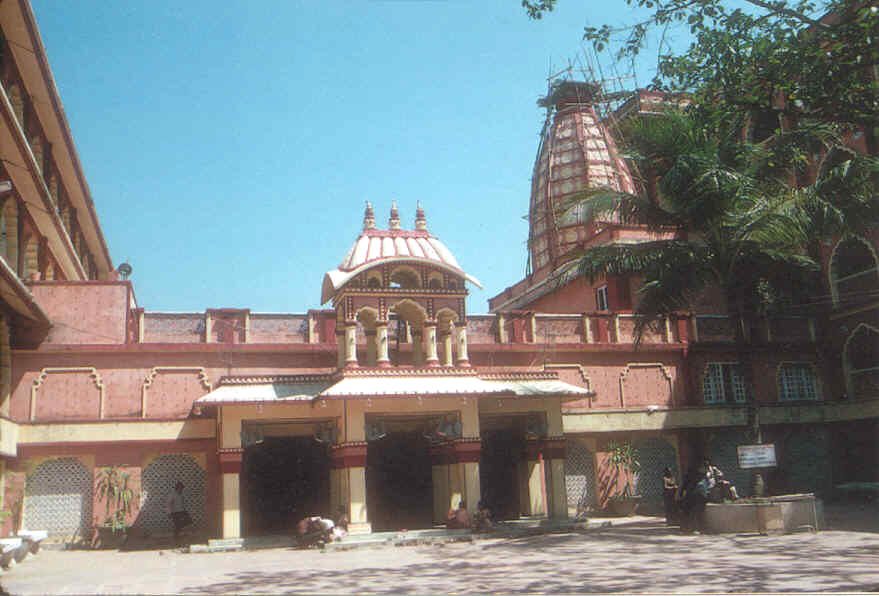 As we enter the Mayapur temple, immediately to our right we can view the most beautiful Deities of Sri Sri Radha-Madhava, as seen below. There is also a magnificent Deity of Lord Narasimha. 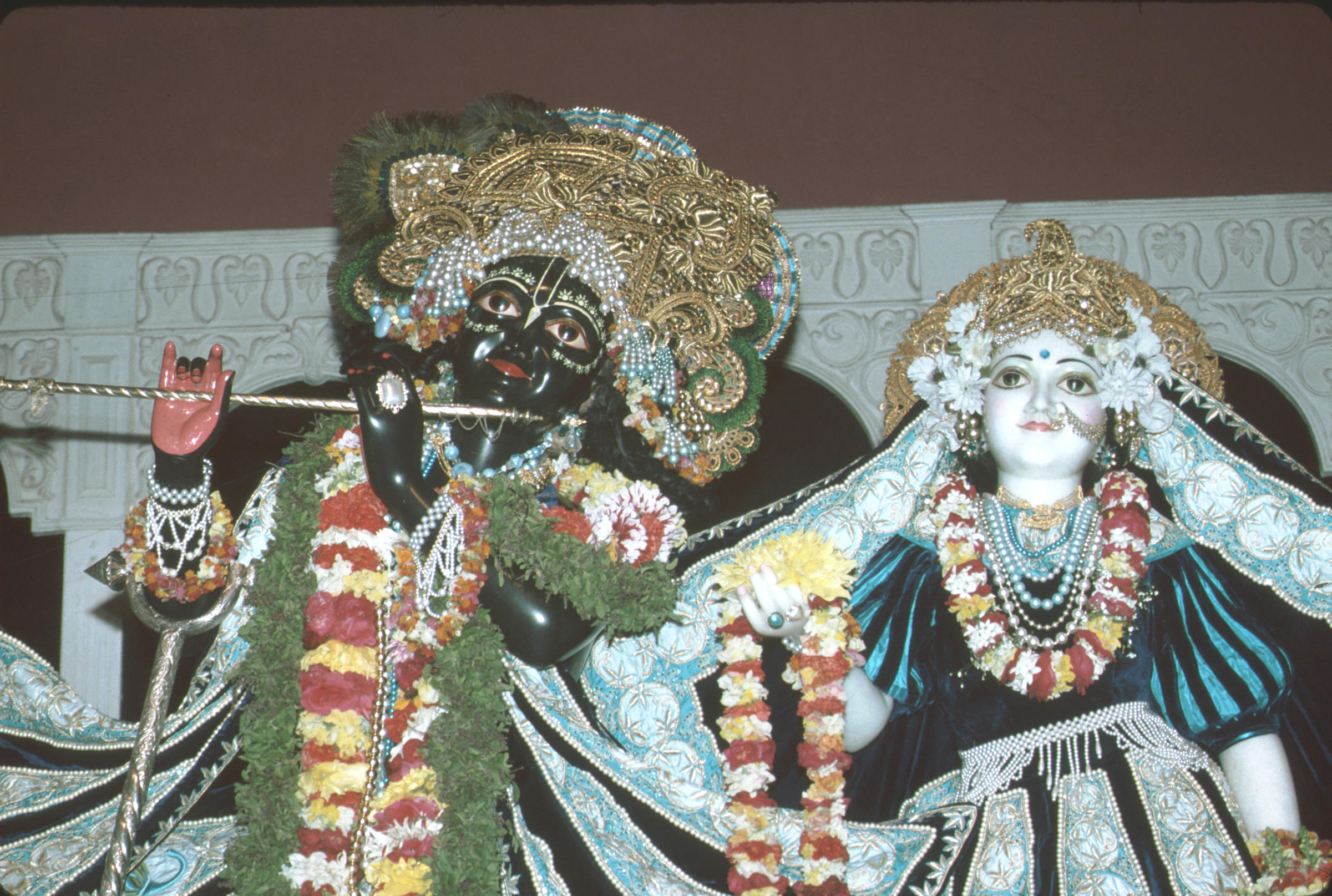 In the temple room in front of the Deities of Sri Sri Radha-Madhava on the festival day of Gaura Purnima, which is the celebration of the appearance day of Lord Caitanya, are hundreds of devotees from around the world. Some are standing to clearly see the Deities, while others are dancing furiously. As predicted by Srila Bhaktivinoda Thakur, there would come a time when devotees from all over the world would converge here to engage in sankirtana, congregational chanting of the holy names of the Lord, and celebrate Lord Caitanya's birthday. Here we can see that prediction manifest. 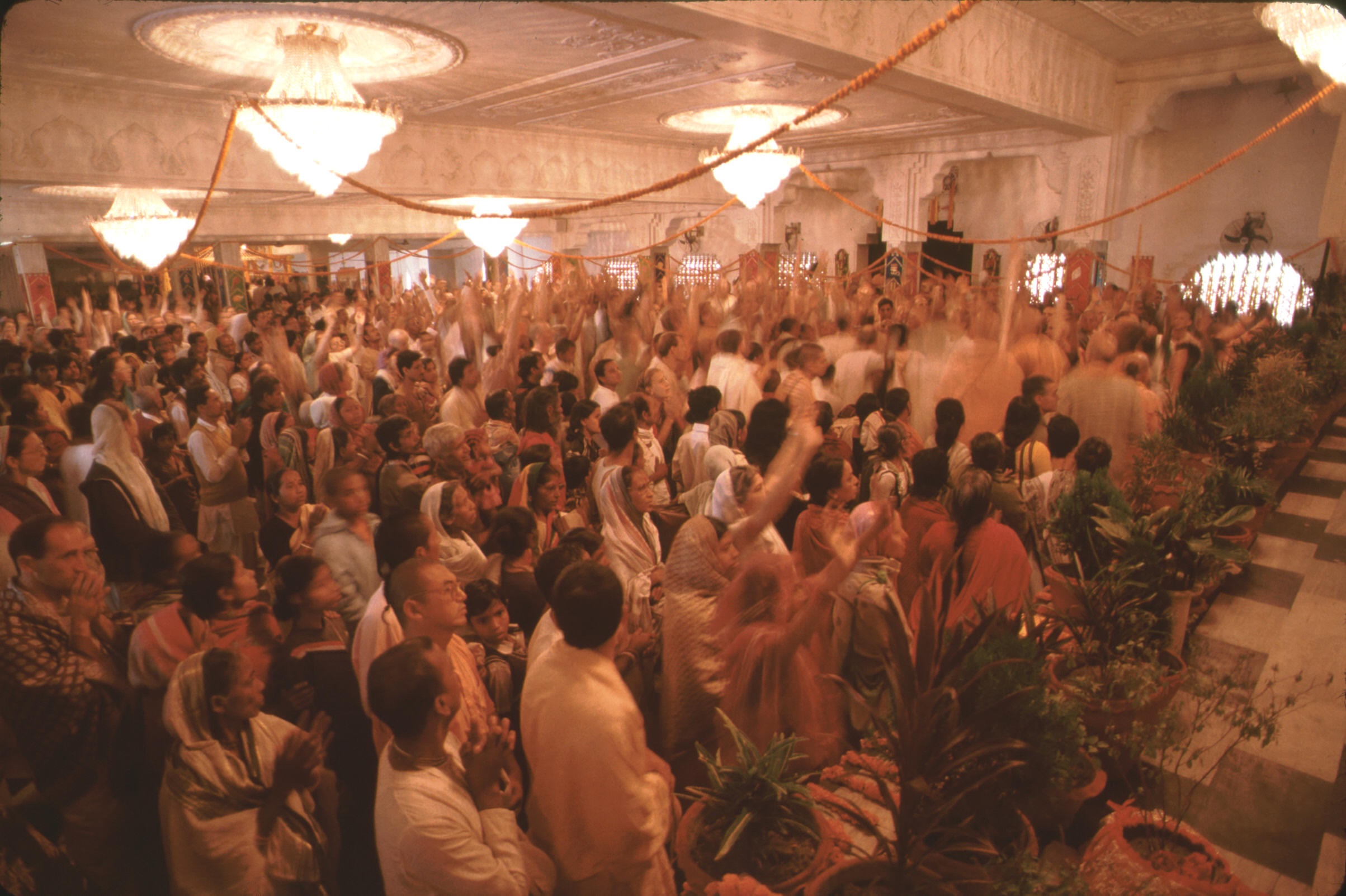 Below is another view of the Iskcon Mayapur temple from the top, overlooking the fountain in the front gardens, the long building in the background, and a branch of the Ganges River in the far background, which lends to the sanctity of the place. (1990) Now, the scene is completely different with the Temple of the Vedic Planetarium taking up the space where the park was. 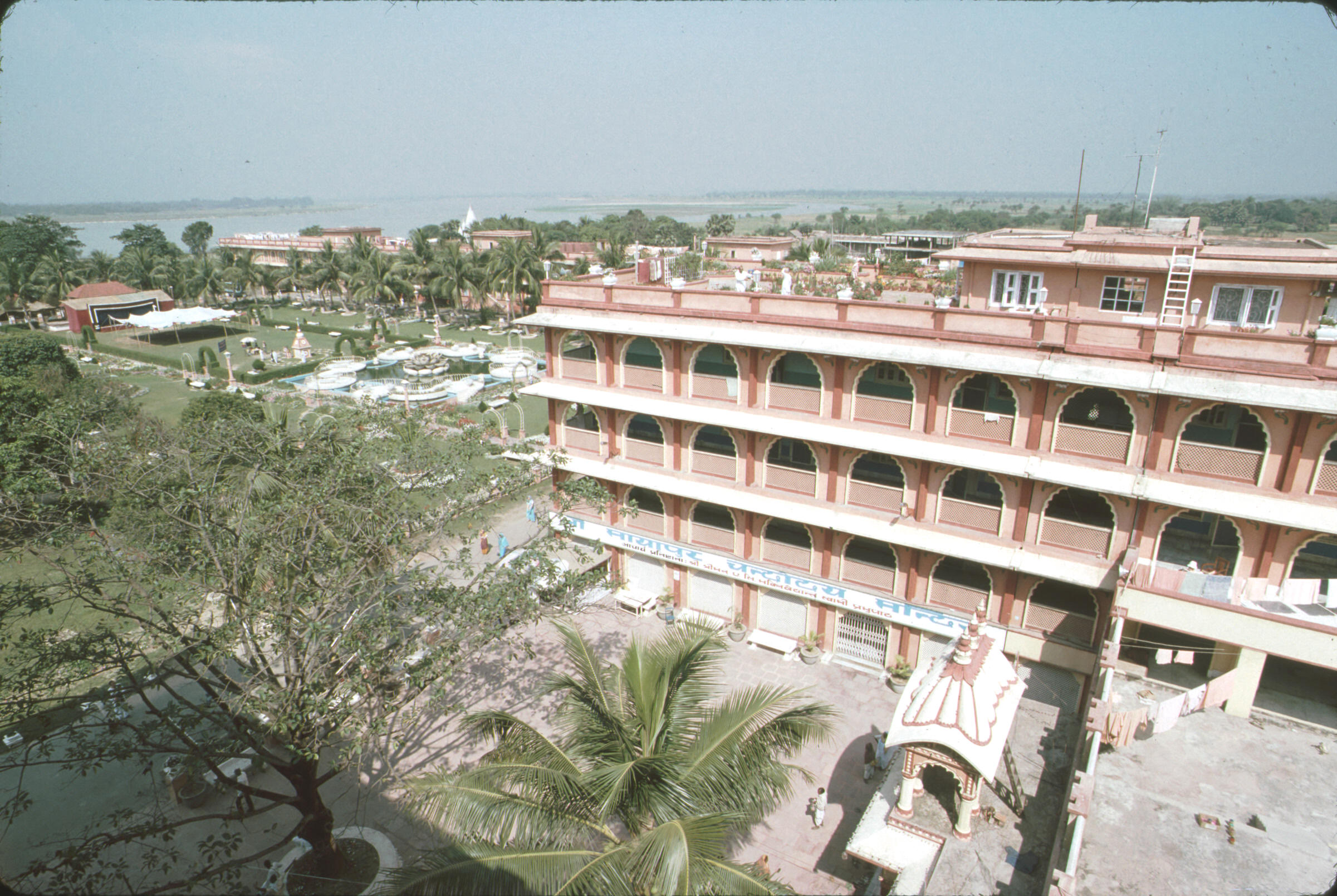 Back to the "Articles" page