Here are two different and less seen views of the Taj Mahal in Agra. This is at dawn in the early morning fog from across the Yamuna River behind the Taj. 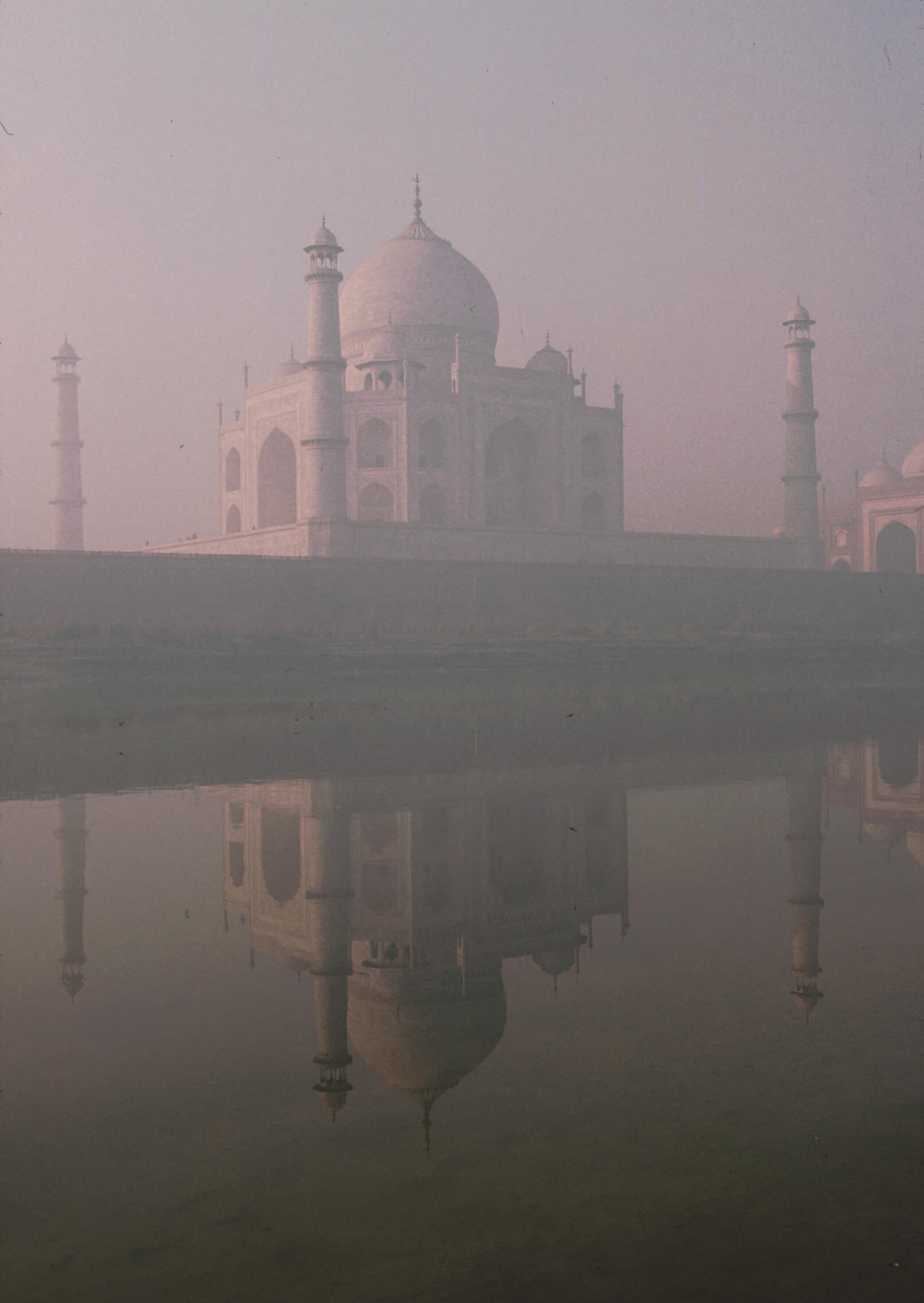 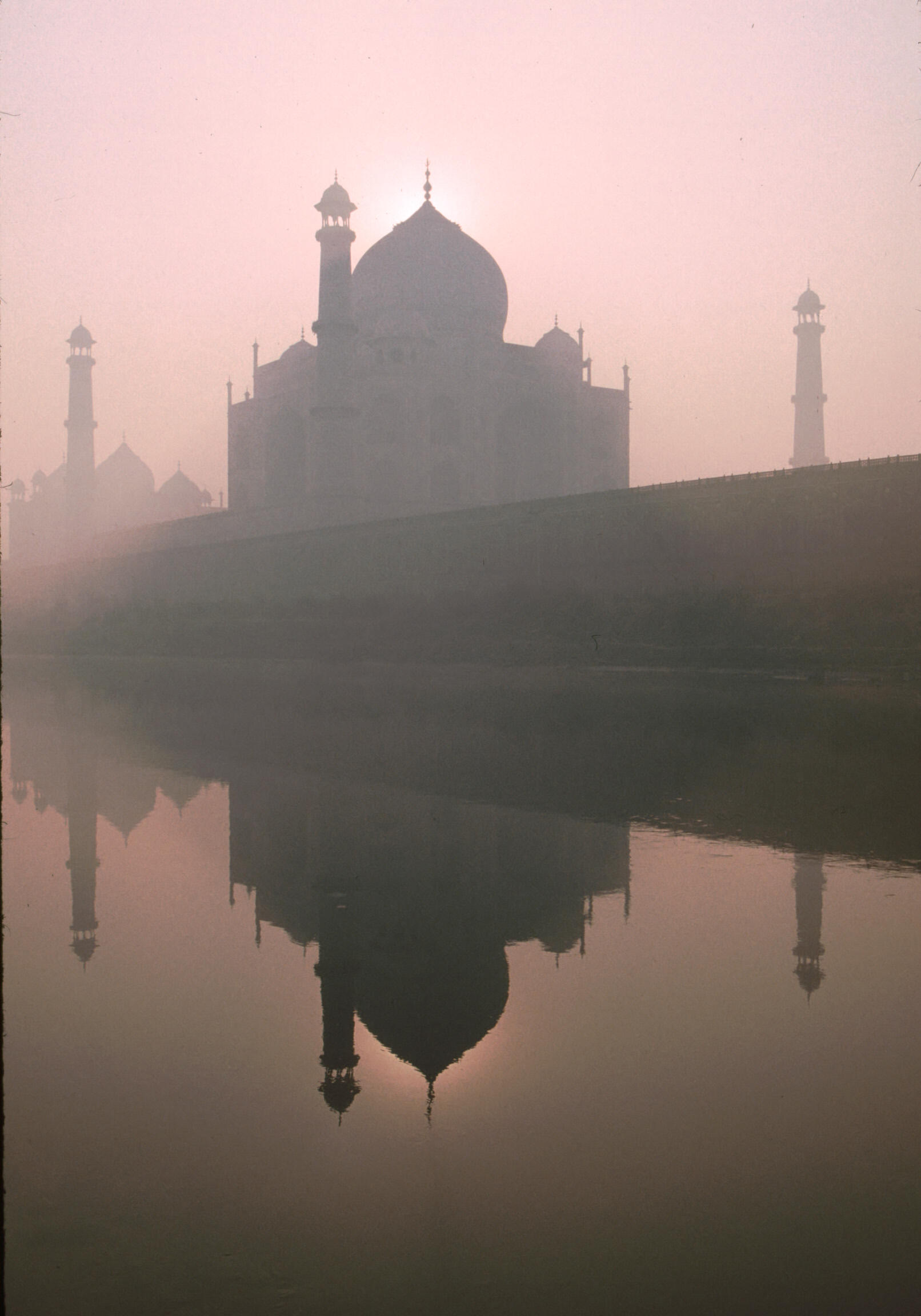 Two devotees at Kedar Ghat at dawn along the Ganges River in Varanasi. One on the right is offering a little worship to the river before bathing, while the other is a brahmin offering respects while standing in the cool water. 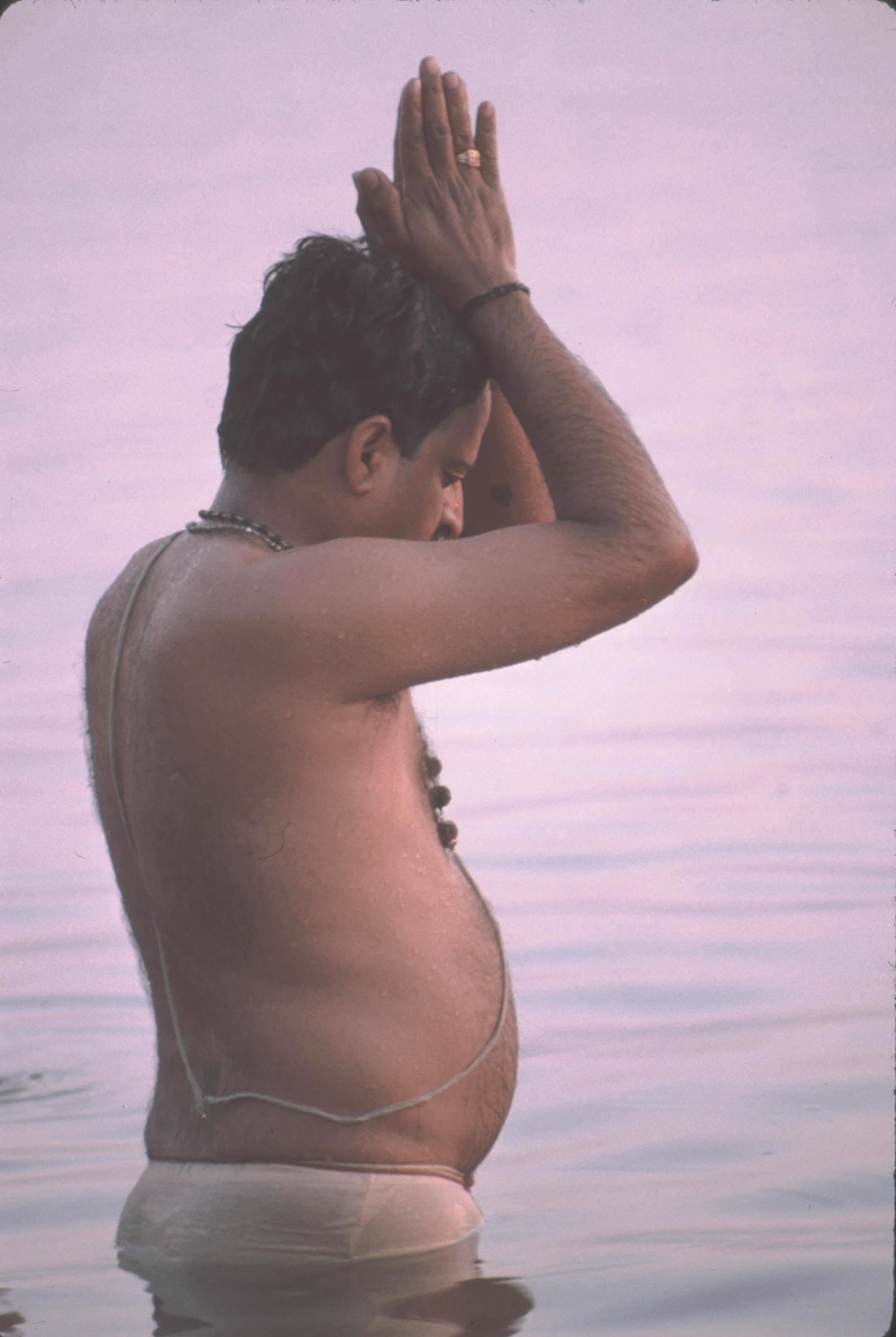 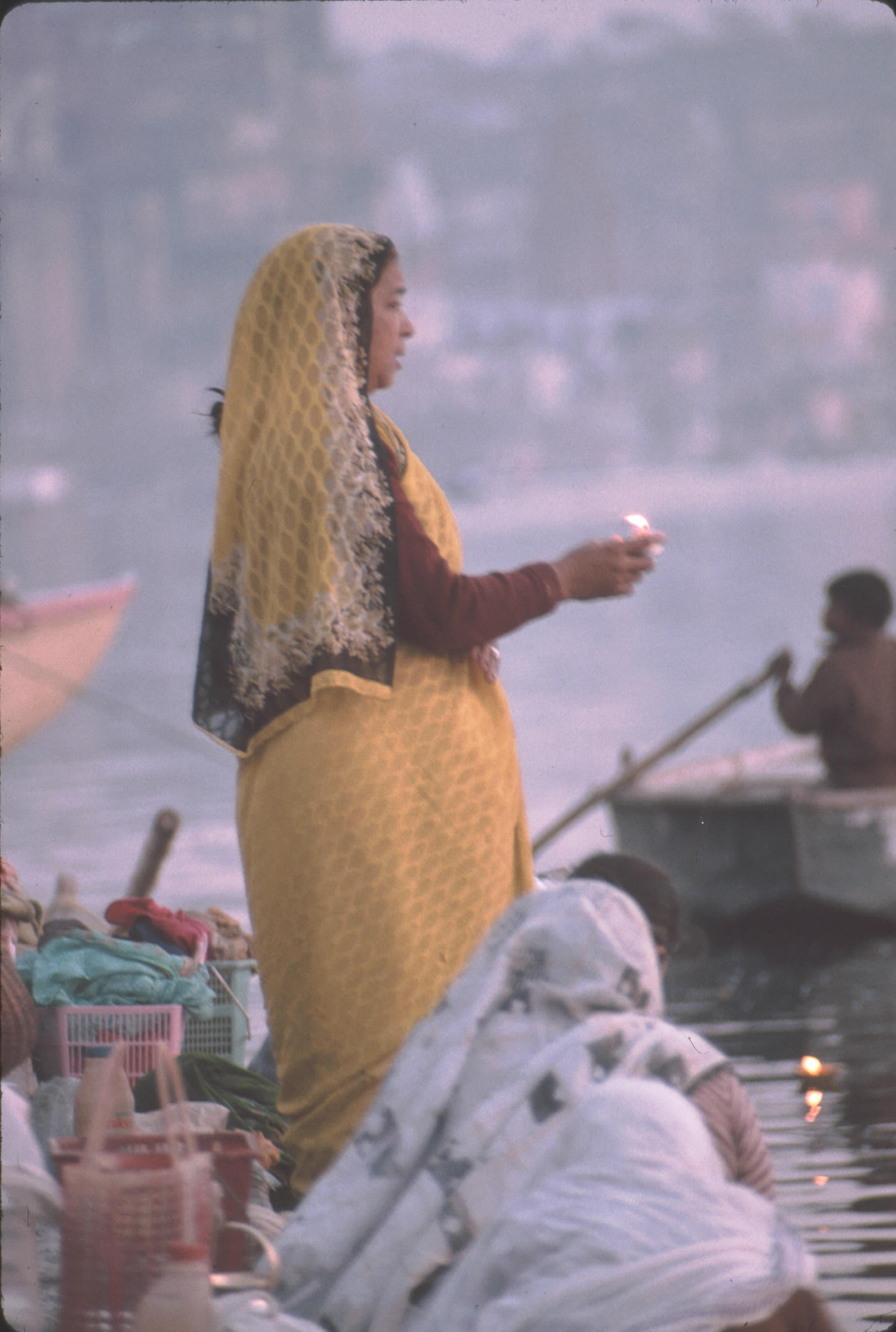 Below are views of two babas. The one on the left is a Naga Baba, having renounced even clothes, who is sitting next to his fire, with flowers around his coils of hair. His body has a grayish complexion because of being covered with ash. The baba or sadhu on the right, having taken his morning bath in the Ganges, is now fixing his hair. 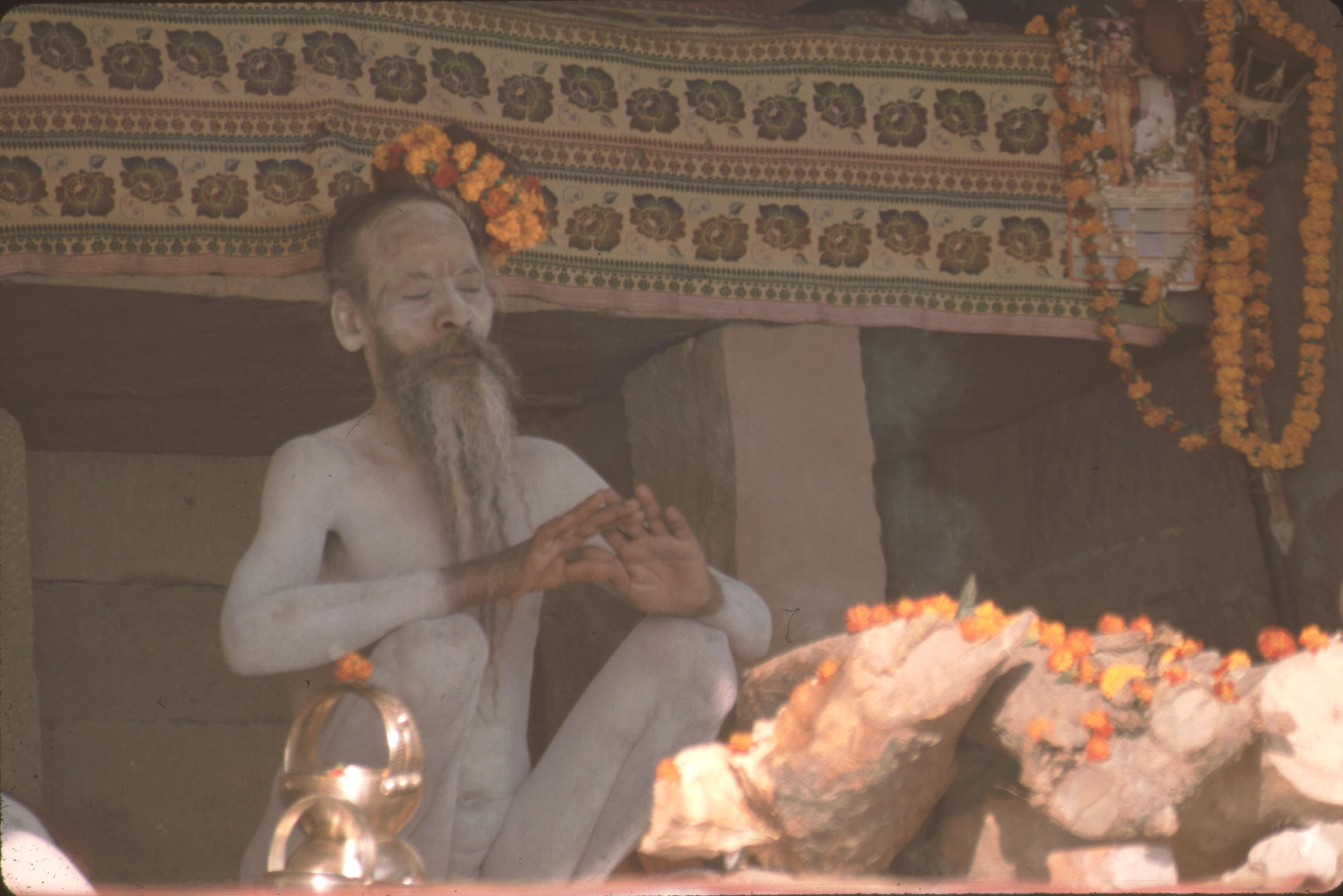 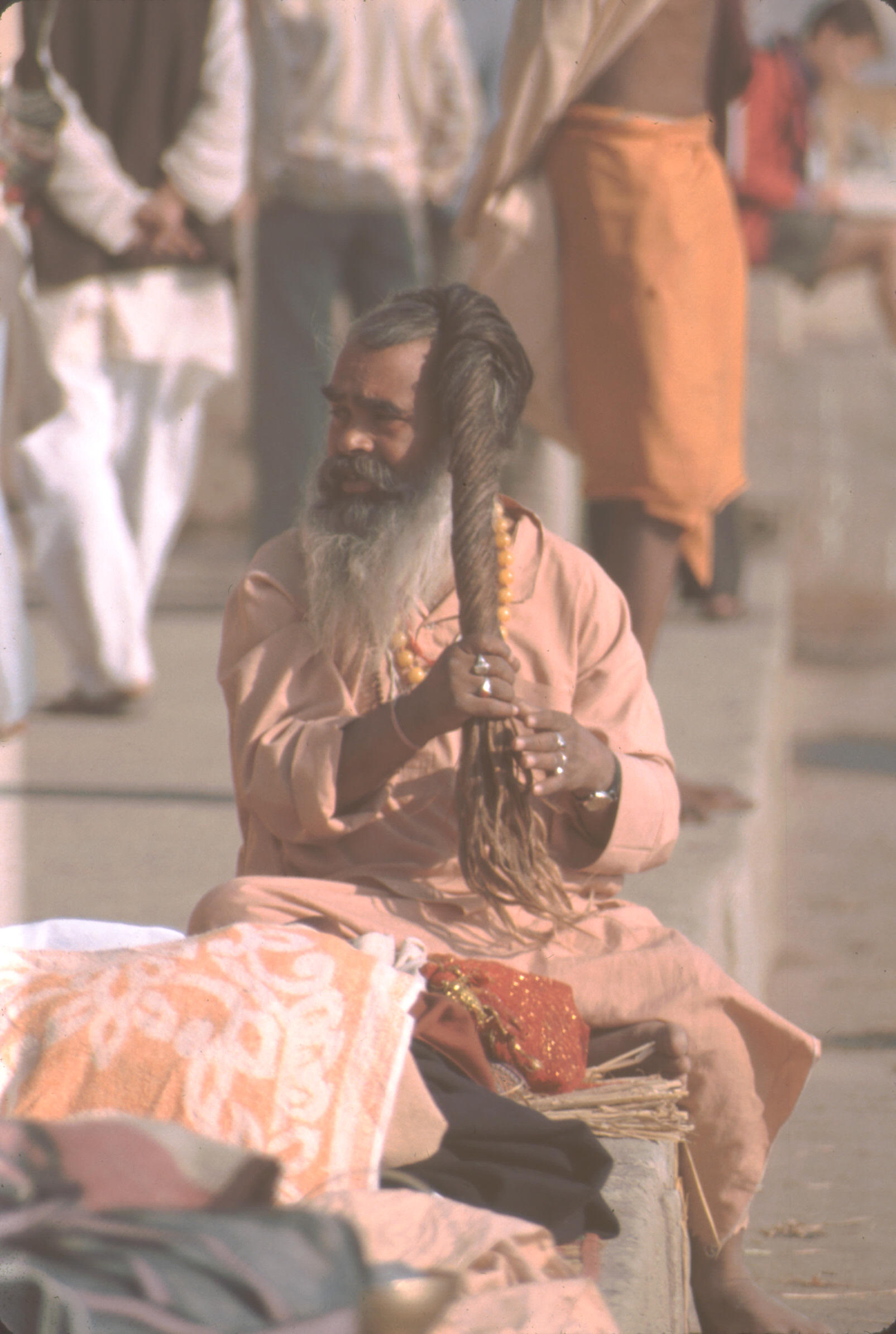 In the early morning light, after having taken a holy bath in the Ganges, a man washes a Shiva-linga with Ganges water as part of his morning devotions. 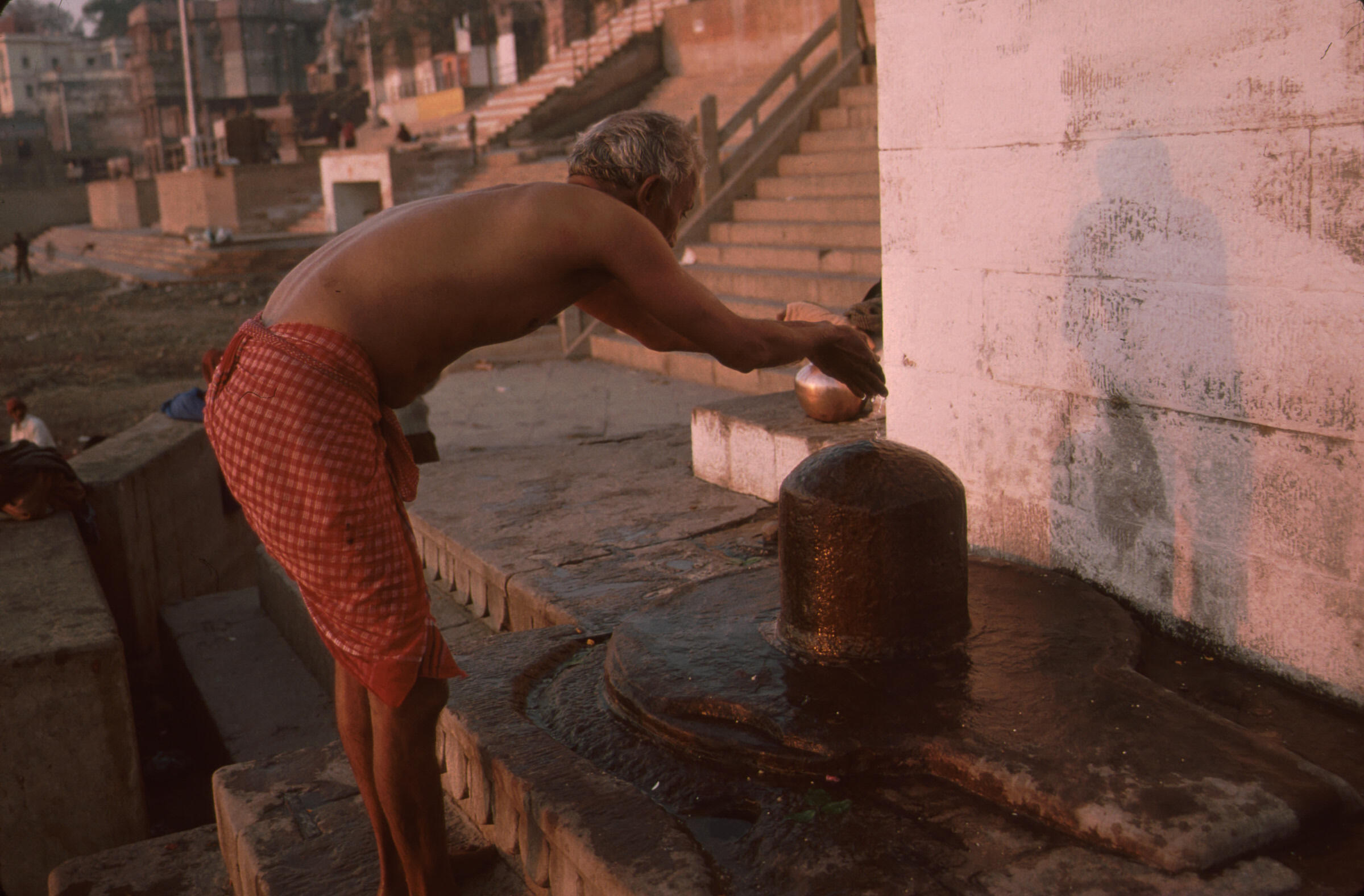 Here is a view of the copper Shiva-linga. Just beyond the platform upon which it is situated, the smoke is rising from an early morning cremation that is underway at the Harischandra Ghat. 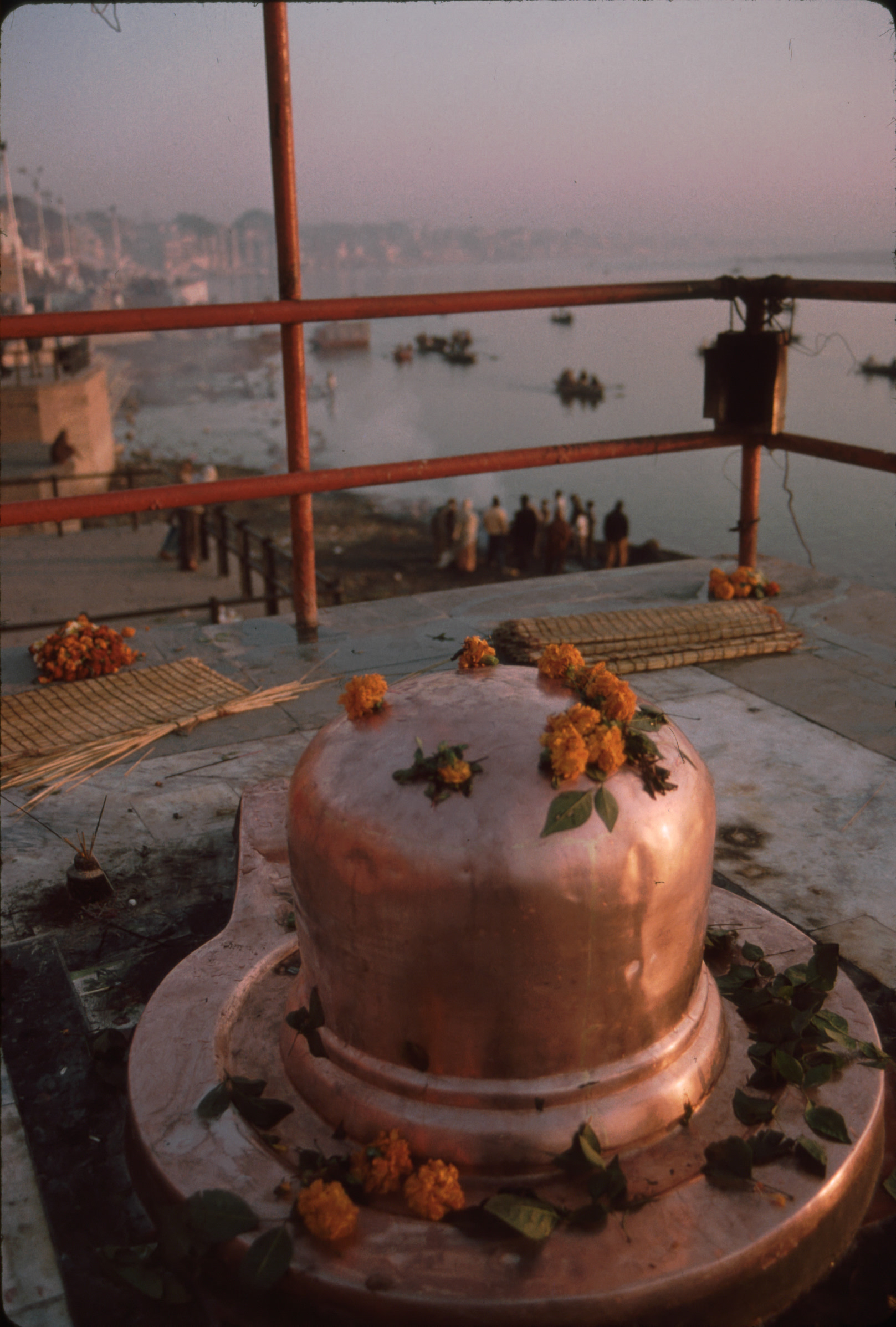 From a boat floating down the Ganges we get a view of the busiest ghats in Varanasi, the Prayaga and Dashvamedha Ghats. 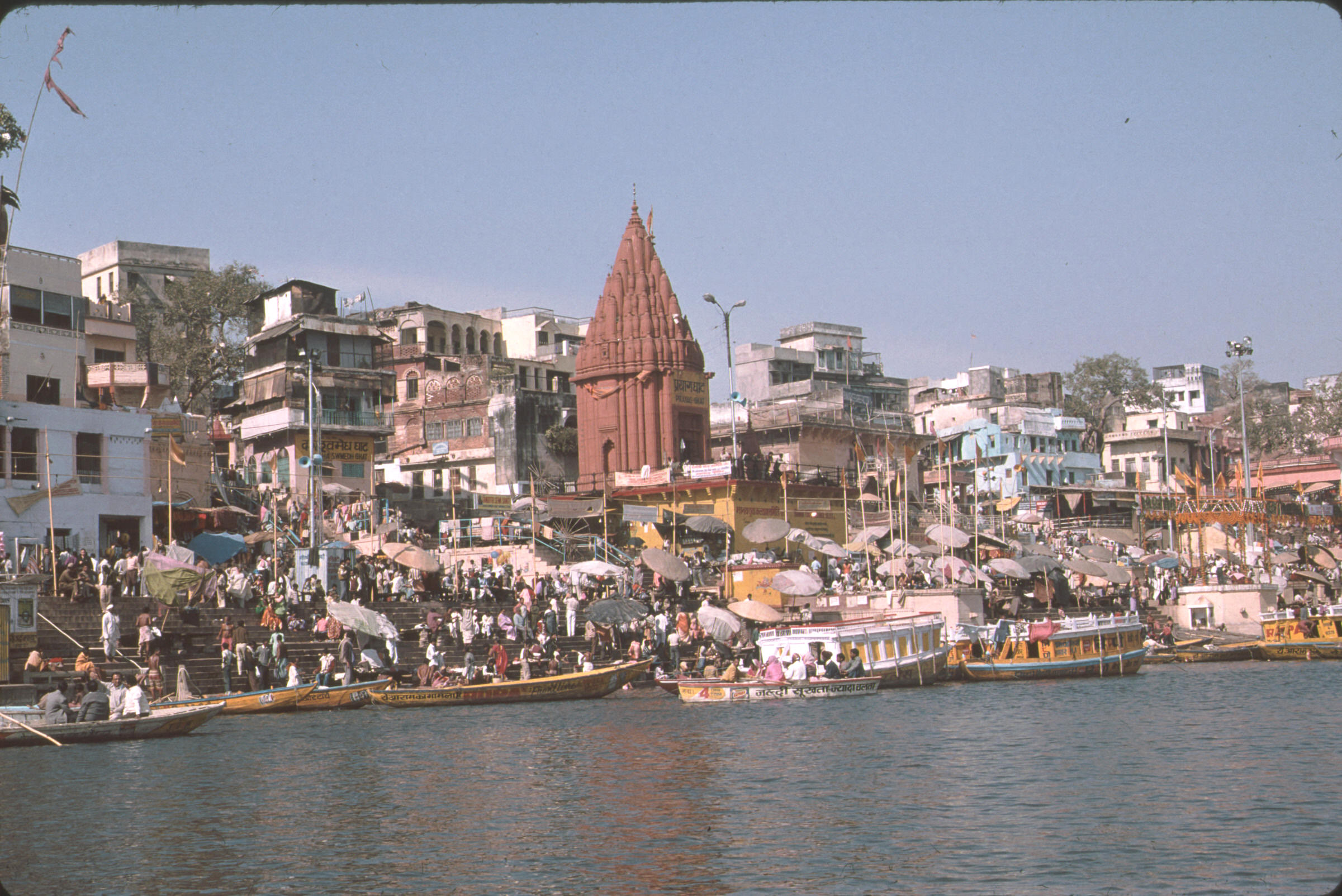 The Ganges is an important expansion of the mother goddess, Ganga Devi. Here is an early morning arati ceremony, offering a lamp with several lit ghee wicks to the Ganga. 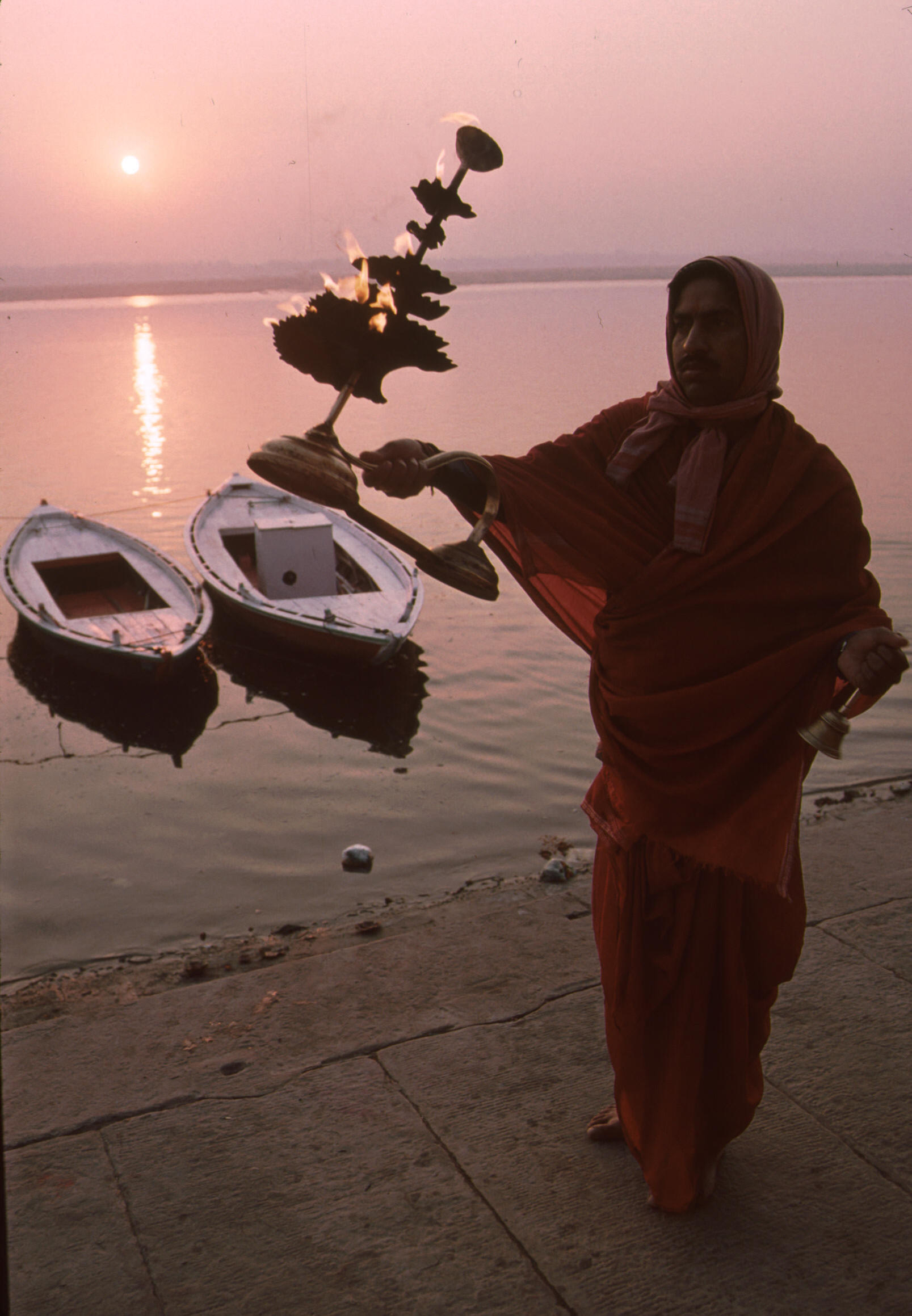 Many people turn out for the regular nightly Ganga puja along the Dashashvamedha Ghat in Varanasi. 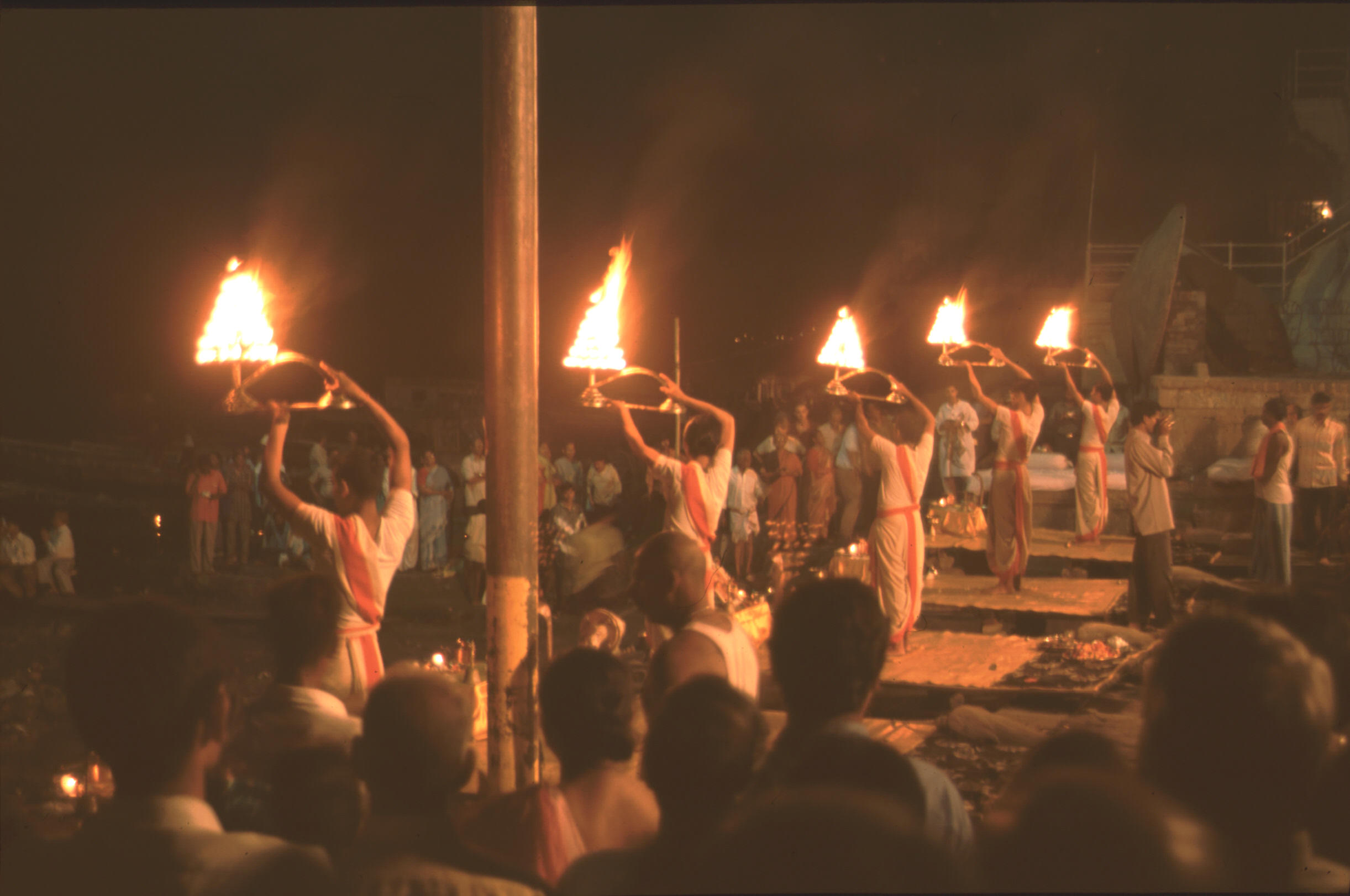 After the Kumbha Mela festival, many of the baba camps came to Varanasi to stay and wait to celebrate the great holy day known as Shivaratri. Here they sit in their tent, engaged in kirtana, singing songs in praise of the Divine. A German man, who has been following the path of the babas for many years, plays along on his mandolin. 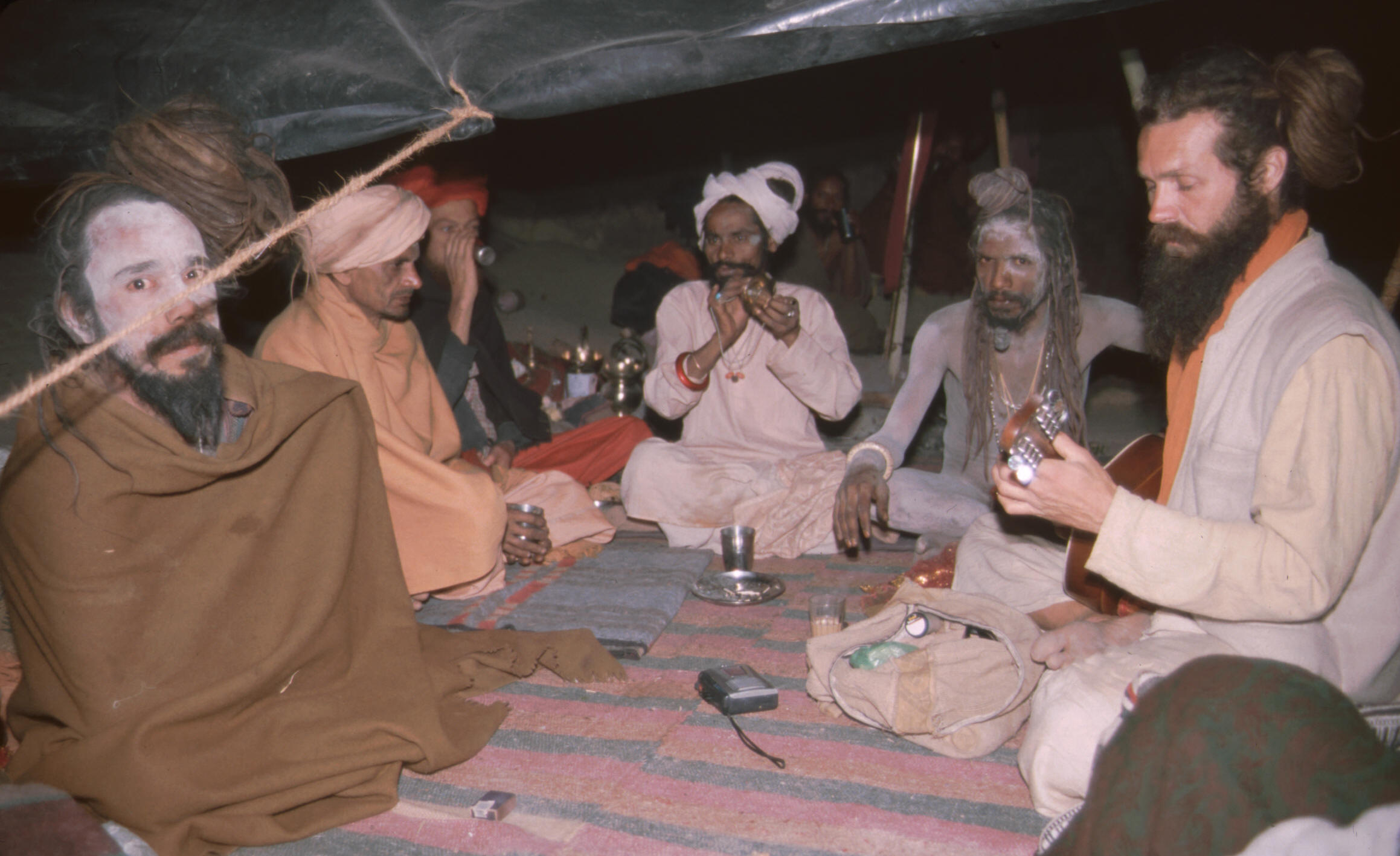 Varanasi is known for its many legends that relate to the city. On the left is a rare photo of the Vishnu Deity at the Adi Keshava Temple. The Adi Keshava temple is located near the Asi Ghat, where it is said Lord Vishnu first placed His feet when He came to Varanasi to get the city back from King Divodasa and give it to Lord Shiva. Since then the city has been known as the city of Shiva, and Kashi, the city of light. 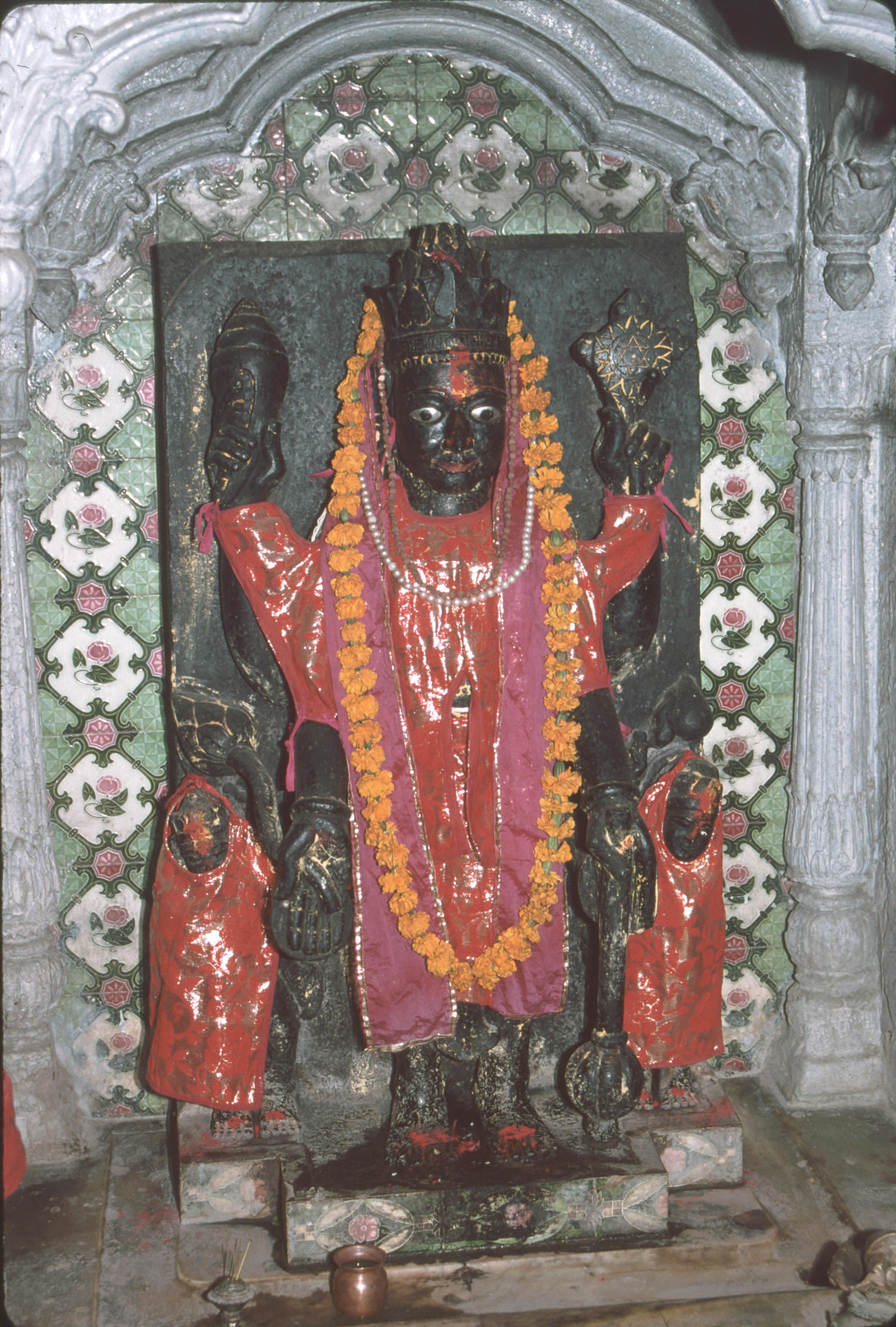 During the festival of Sarasvati, the goddess of learning, a few weeks before Shivaratri, many areas of India celebrate with the making of images of Sarasvati. Then there are neighborhood gathering with the worship of Sarasvati, and sometimes pulling a cart with her image on it. This was a beautiful image of Sarasvati that was in one of the alleys in Varanasi. 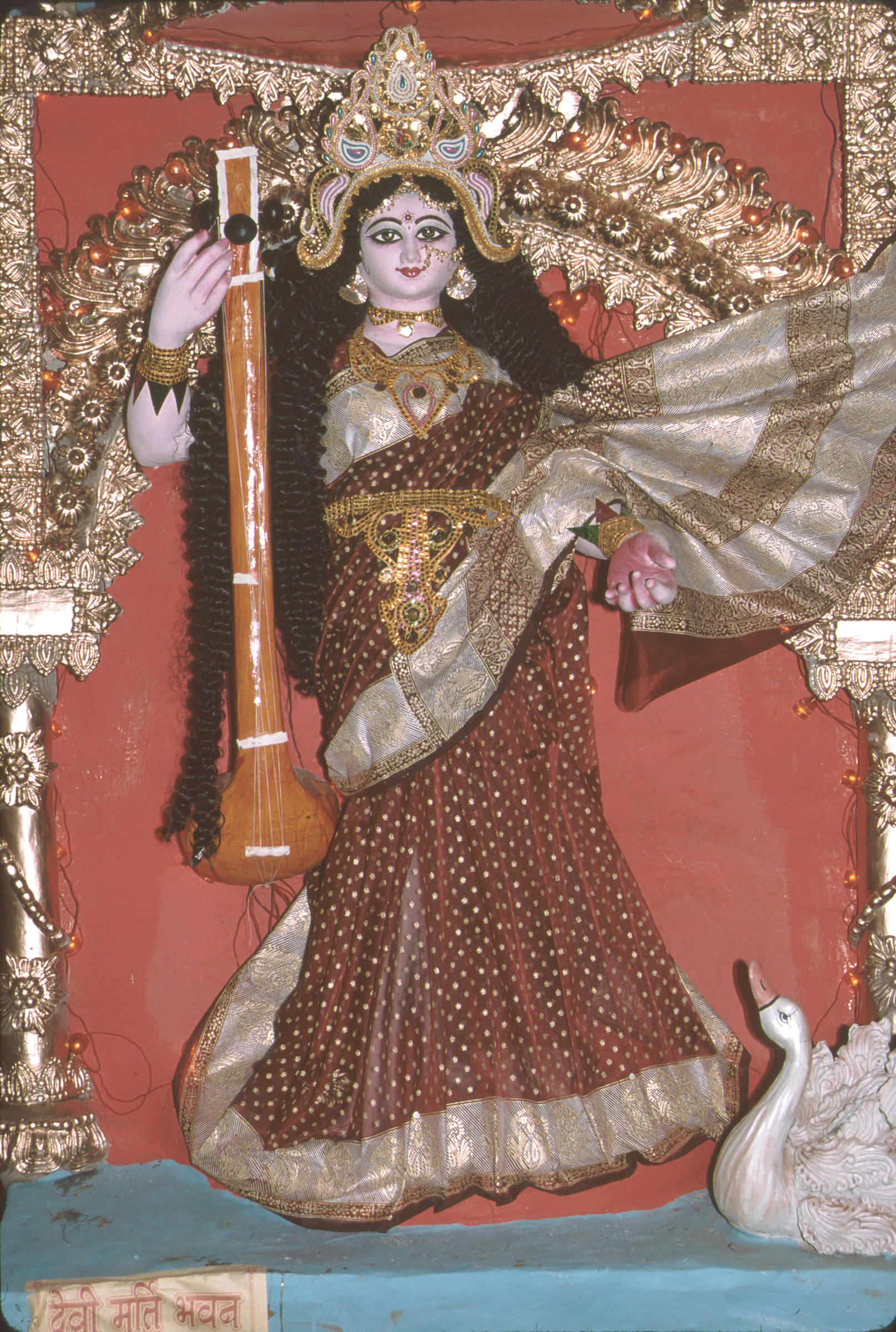