In regarding  the places of pilgrimage for any Buddhist are the locations where the Buddha had stayed, gave his sermons, or became enlightened. Among these places there are four that are the most prominent. These are Lumbini where the Buddha was born; Bodhgaya where he became enlightened, Sarnath where he gave his first sermon to the first followers that he had, and Kushinagar where he left this world, entering into Mahanirvana. This is a photographic journey to these four places.

Lumbini, the Place of Buddha's Birth

While we are crossing into Nepal from Saunali, the nearby town of Lumbini is considered to be the birthplace of Gautama Buddha. So for many Buddhists and Hindus alike, this is an important place of pilgrimage. When the taxi arrives at our hotel to pick us up, it is a 45 minute drive to Lumbini, about 22 km away. You can also take the bus, which leaves every half-hour and is cheaper, but it moves rather slowly and is not all that convenient. So I take a taxi. There is not much to see in Lumbini, so it is best to simply see it as a day trip from Saunali. However, as with any such place like this, as the tourist and pilgrim trade increases, there are more buildings and temples with monasteries that are being built.  Our whole visit to Lumbini will take no more than a few hours. Then it is back to Saunali.

One of the main points of interest here is the kund or pond where Buddha’s mother, Maya Devi, bathed before she gave birth to Buddha, and where ablutions were performed after his birth. There is also a Tibetan Buddhist monastery that you can visit that has beautiful wall murals and a huge image of Buddha. There are some joyful and young Buddhist monks that also stay here. 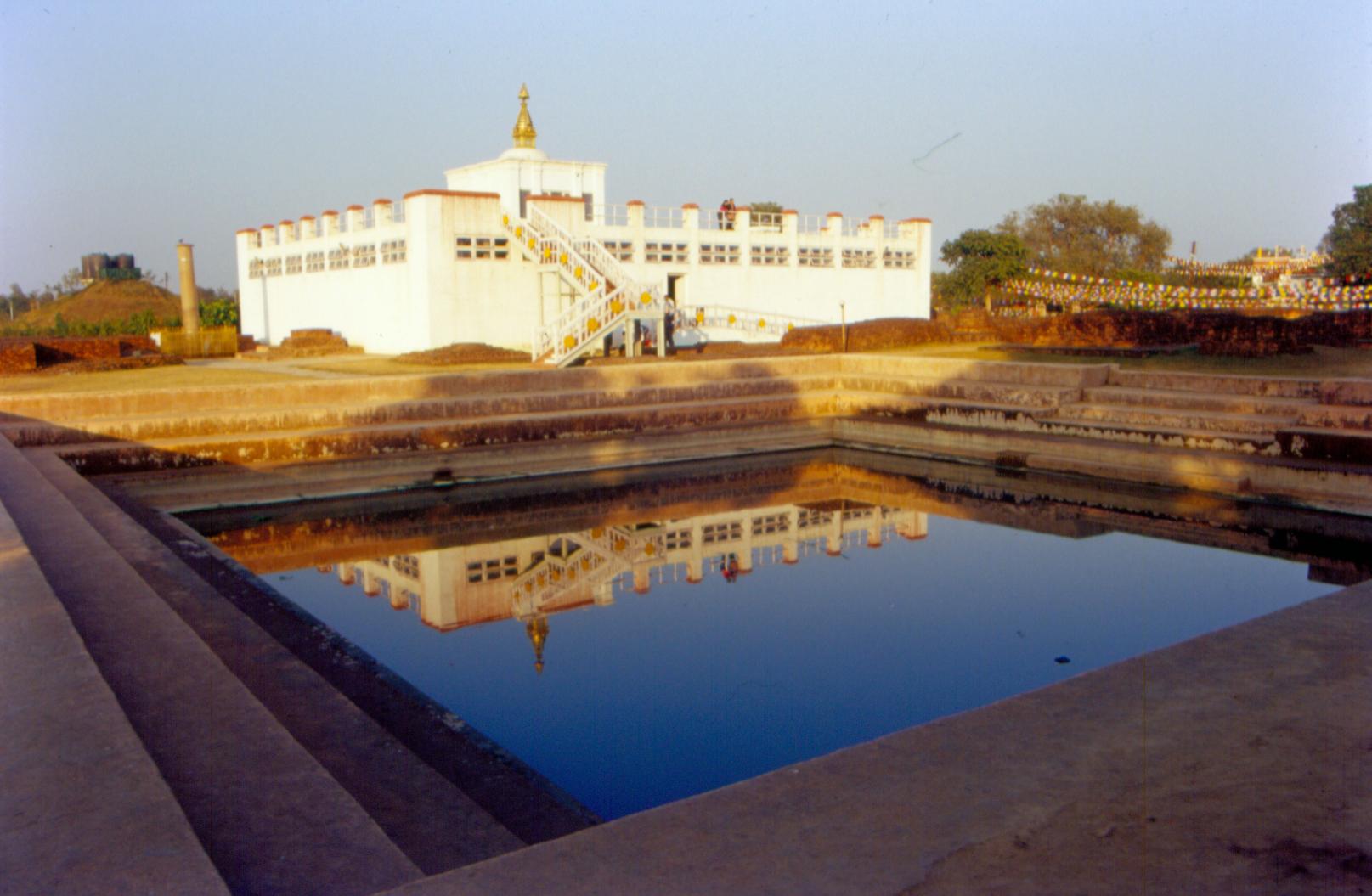 Near the pond are a number of ruins from the ancient monasteries that once stood here. 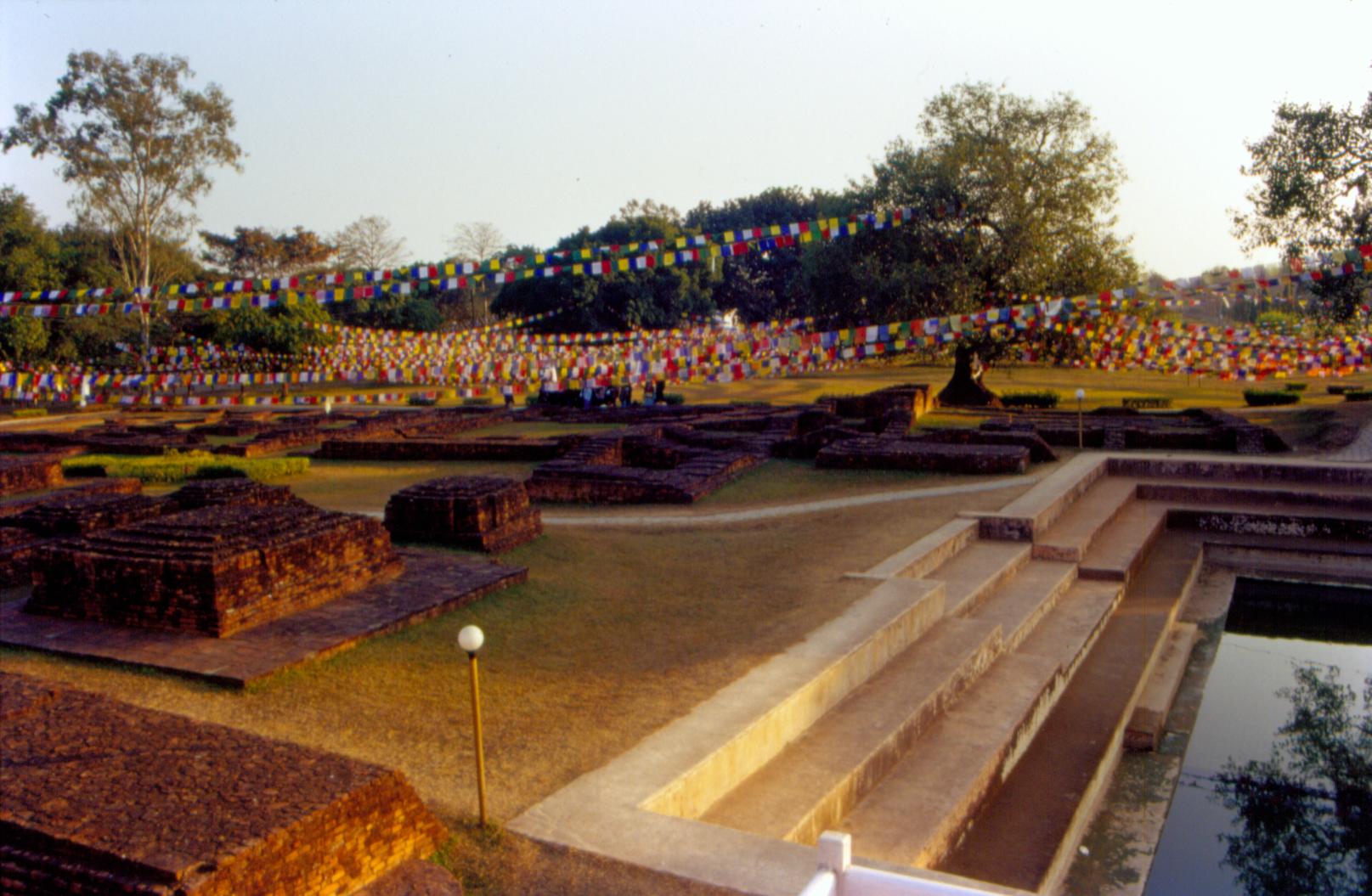 The Ashoka pillar, built in 244 B.C. by Emperor Ashoka, is near the site where Buddha was born. 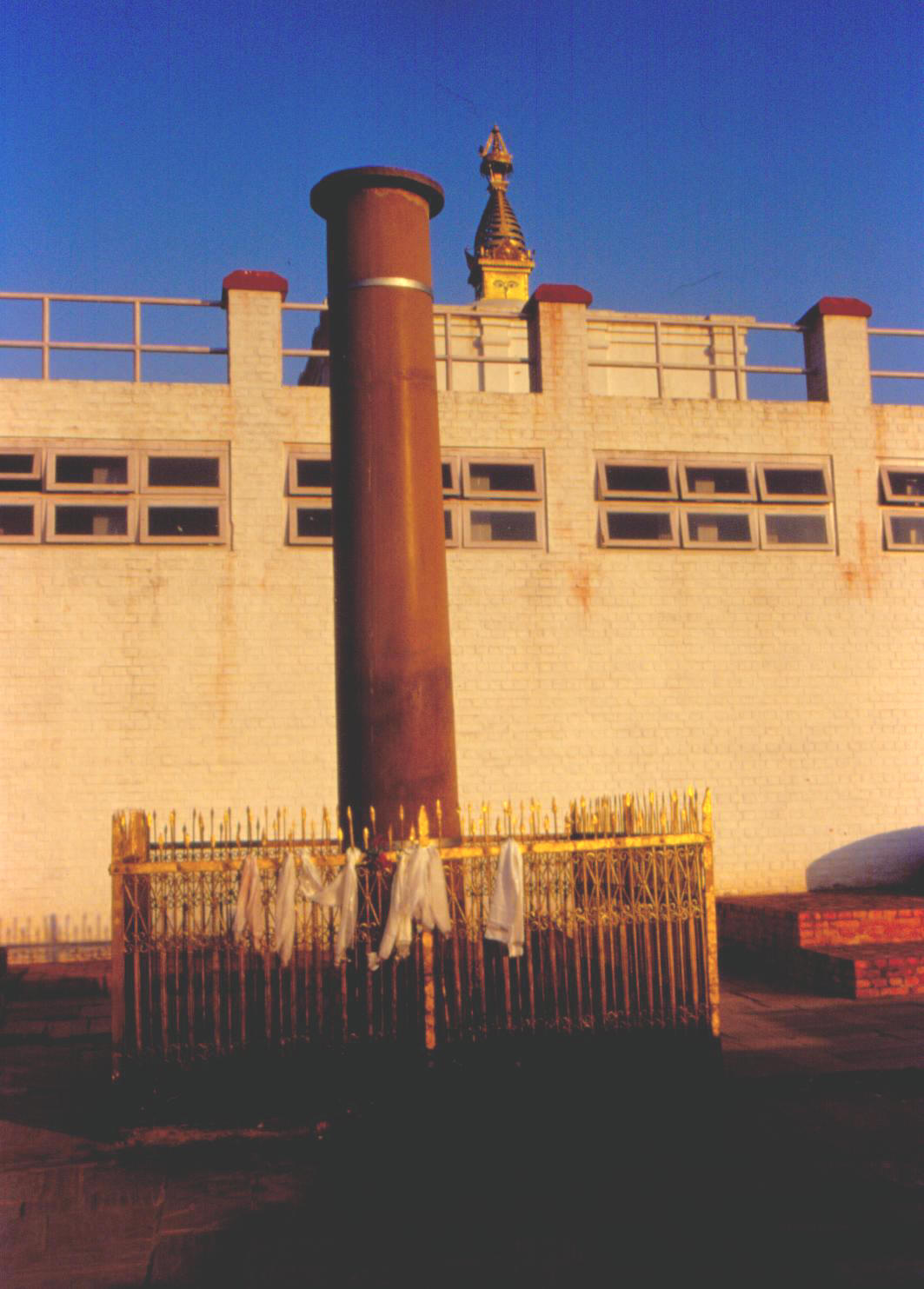 Near the Ashoka Pillar and Maya Devi pond is a small temple that has a slab of rock with the scene of Buddha’s birth carved on it. It shows Maya Devi holding onto a tree while Buddha is emerging from her side. Some say the rock has Buddha’s footprint on it. Modern excavations have discovered the foundations of an old monastery, the ruins of which you can see nearby. 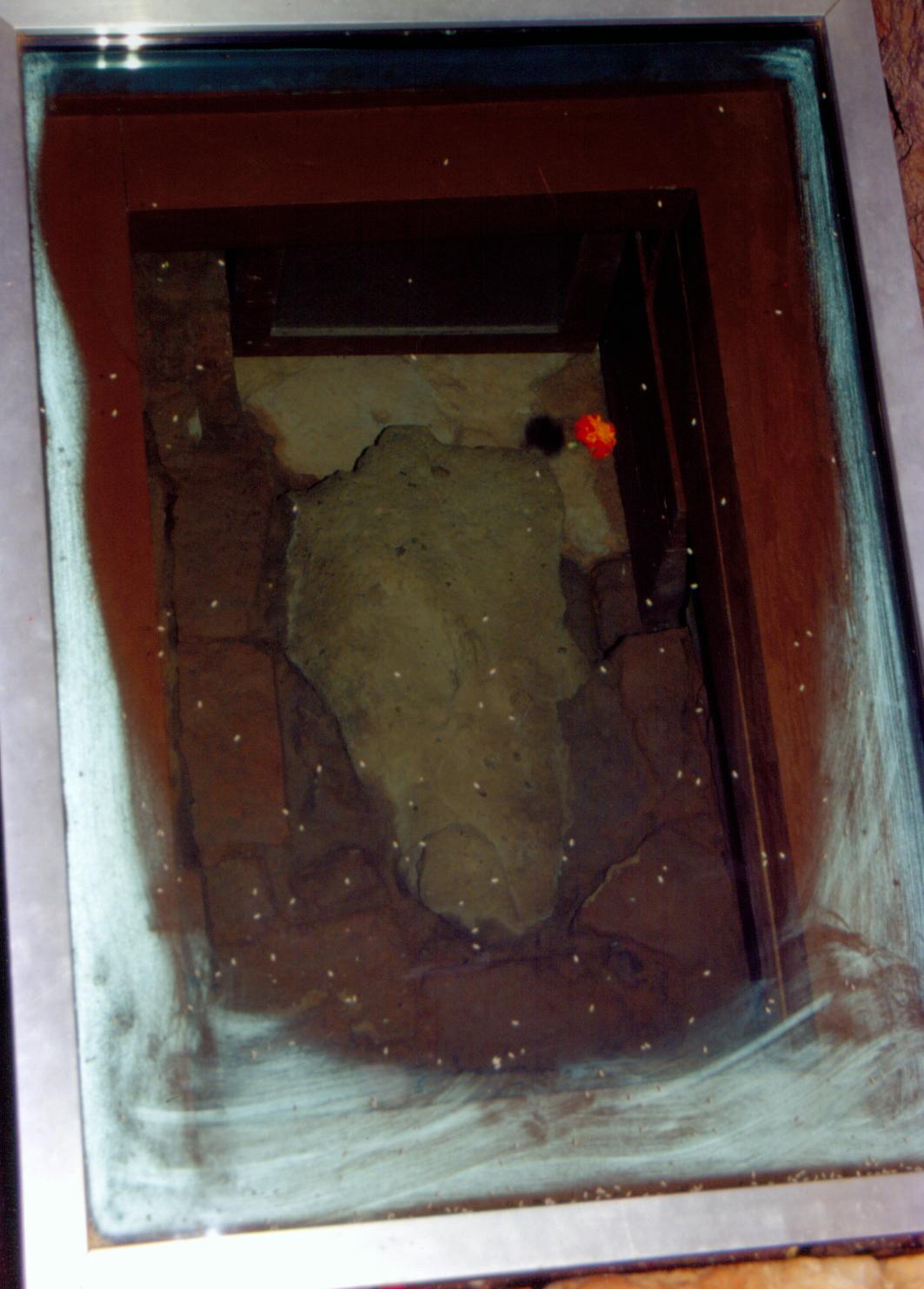 The Japanese Peace Pagoda is on the outskirts of town. It is a lovely pagoda, with a different form of Buddha facing in each of the four directions. There is a small monastery just across from it. Then we can visit some of the other newer temples and monasteries in the vicinity. These often represent the different Buddhist countries, from Thailand, China, Japan, or Tibet. 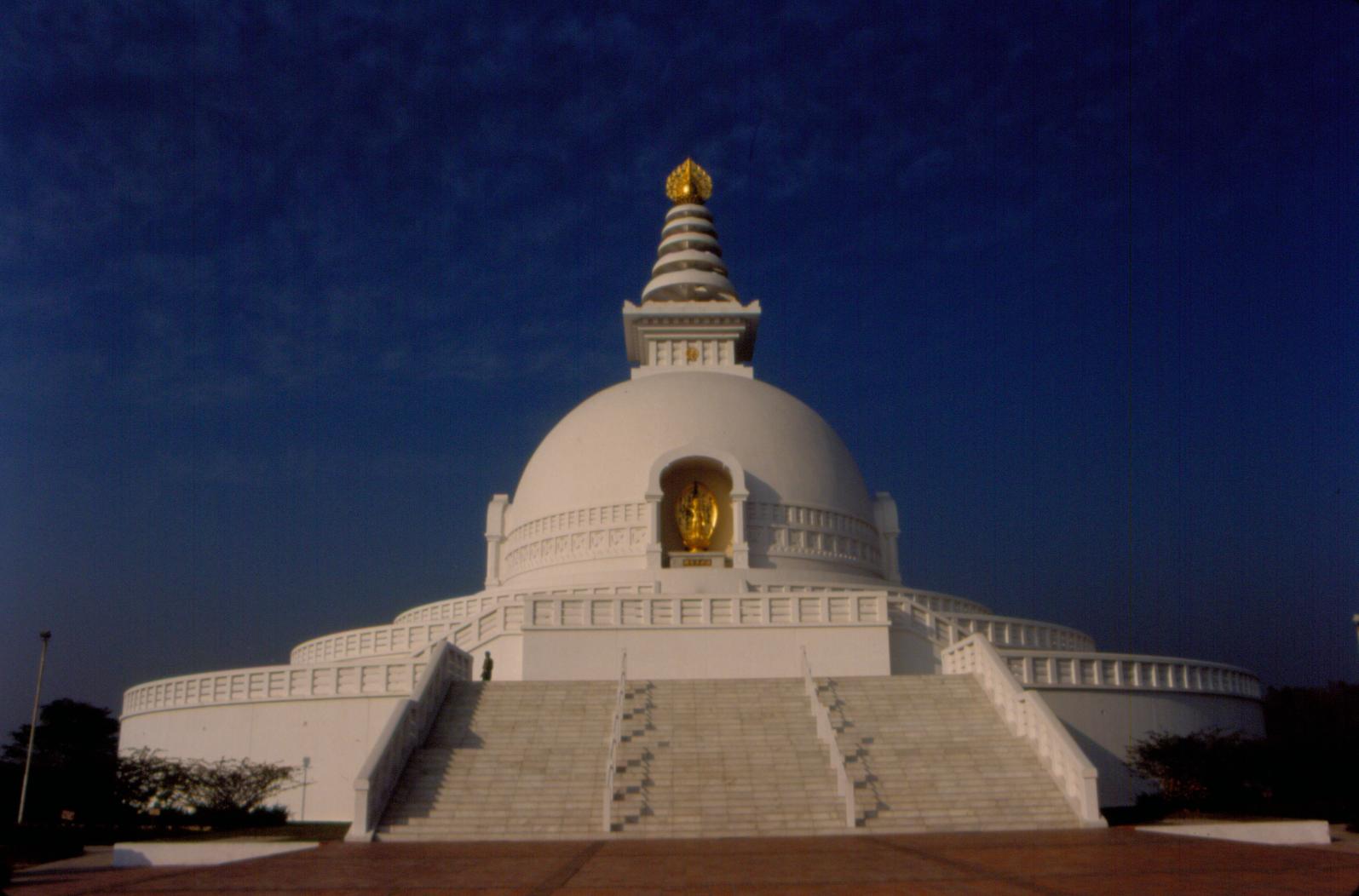 Another beautiful temple near a complex that contains several other temples is the Lokamam Cuda Pagoda. 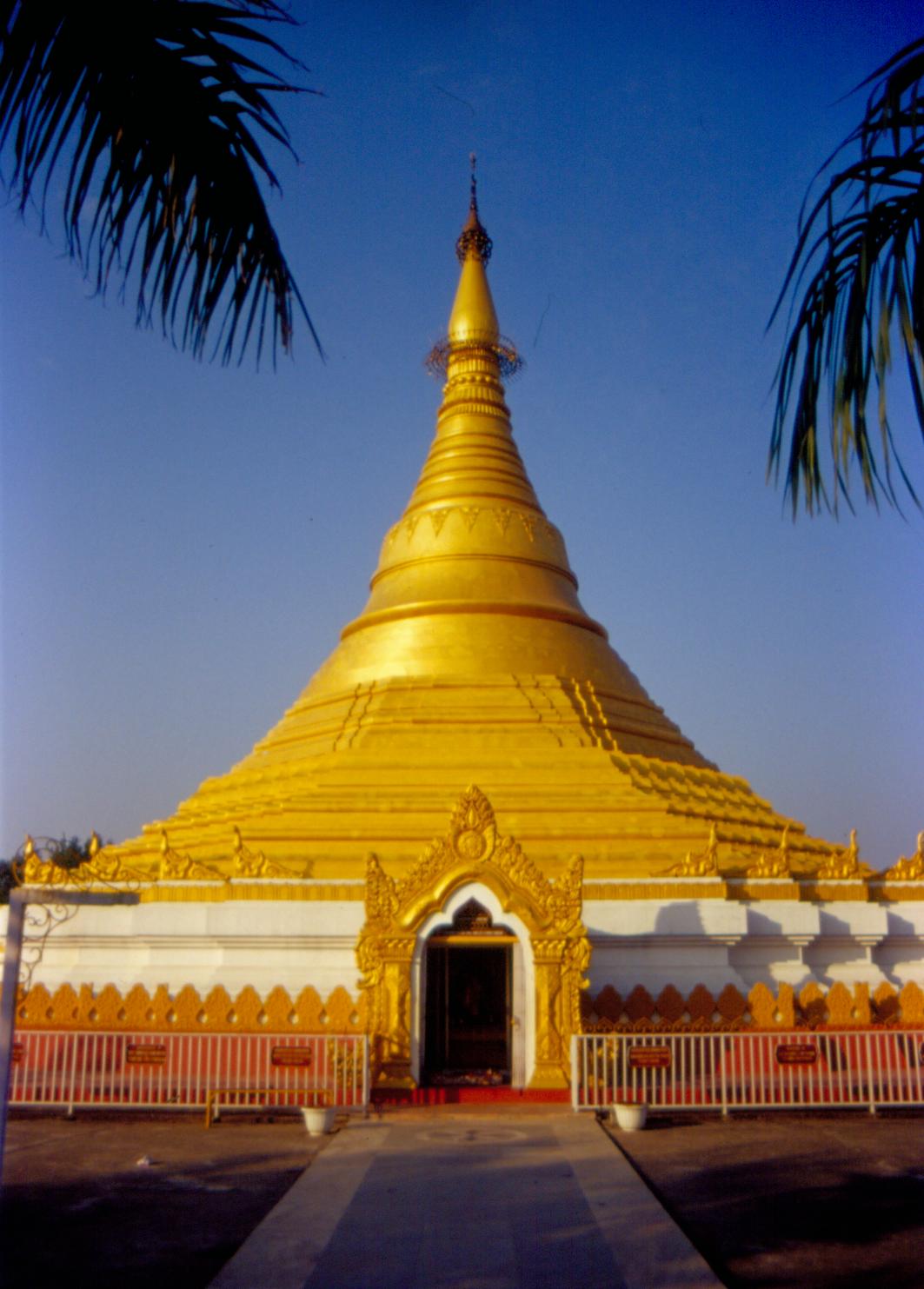 Bodhgaya, the Place of Buddha's Enlightenment

Bodhgaya is 13 km from Gaya and is reached by taking a ride a bus or minibus from Gaya. Bodhgaya is one of the most sacred places of Buddhism for it was here that Buddha became enlightened and where Buddhism really began. Many Buddhists as well as Hindus come here from all over the world. The most important place in this very small town is the Mahabodhi temple which has a pyramidal tower rising 180 feet high, situated next to the Bo tree. Bodhgaya is probably the most important of the holy places connected with Buddha because of it being where he became enlightened and where Buddhism began. 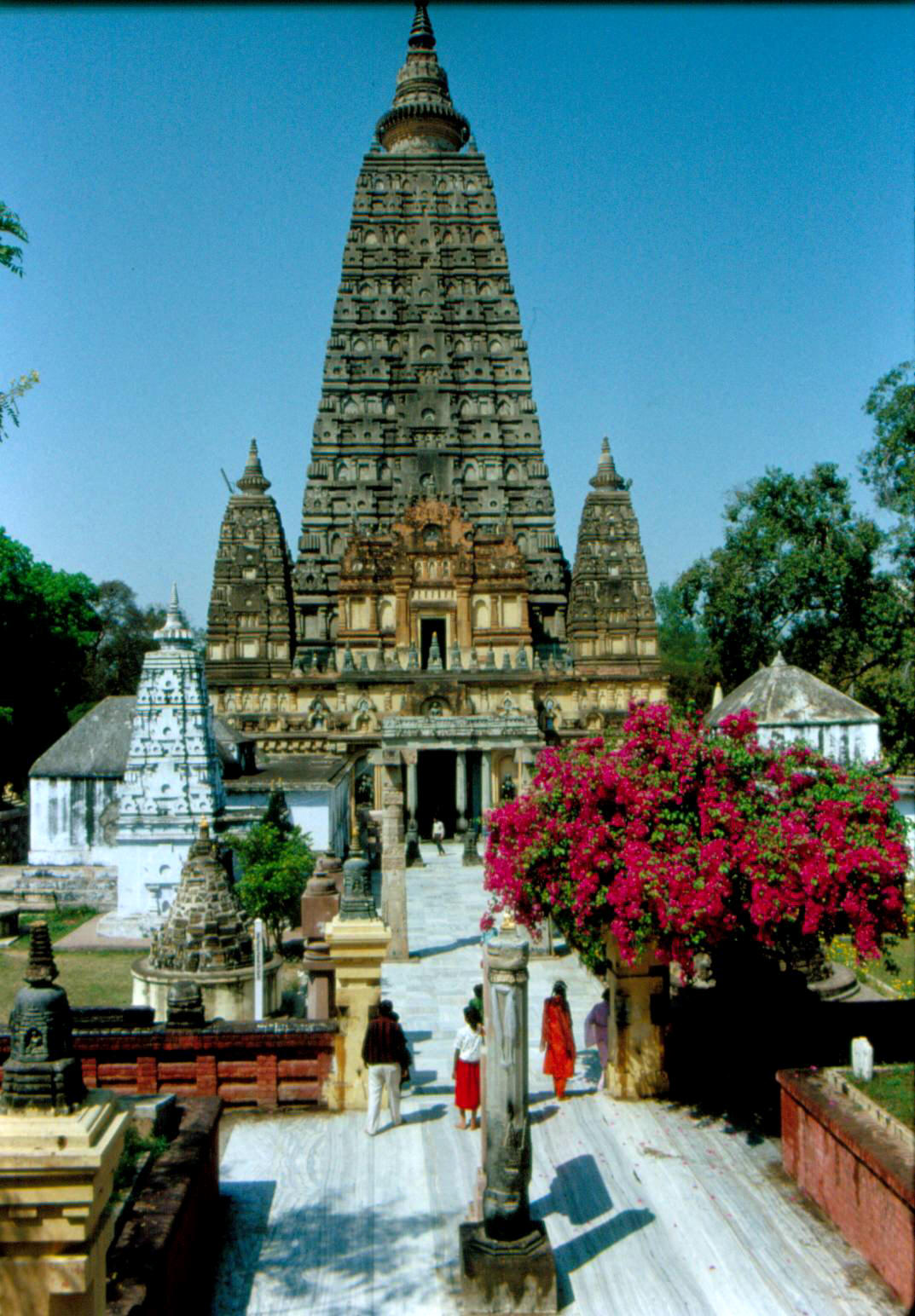 In the tall spired temple, which is supposed to be similar to the original one that was built by Ashoka in the third century B.C., there is a large gilded image of the Buddha on the altar. 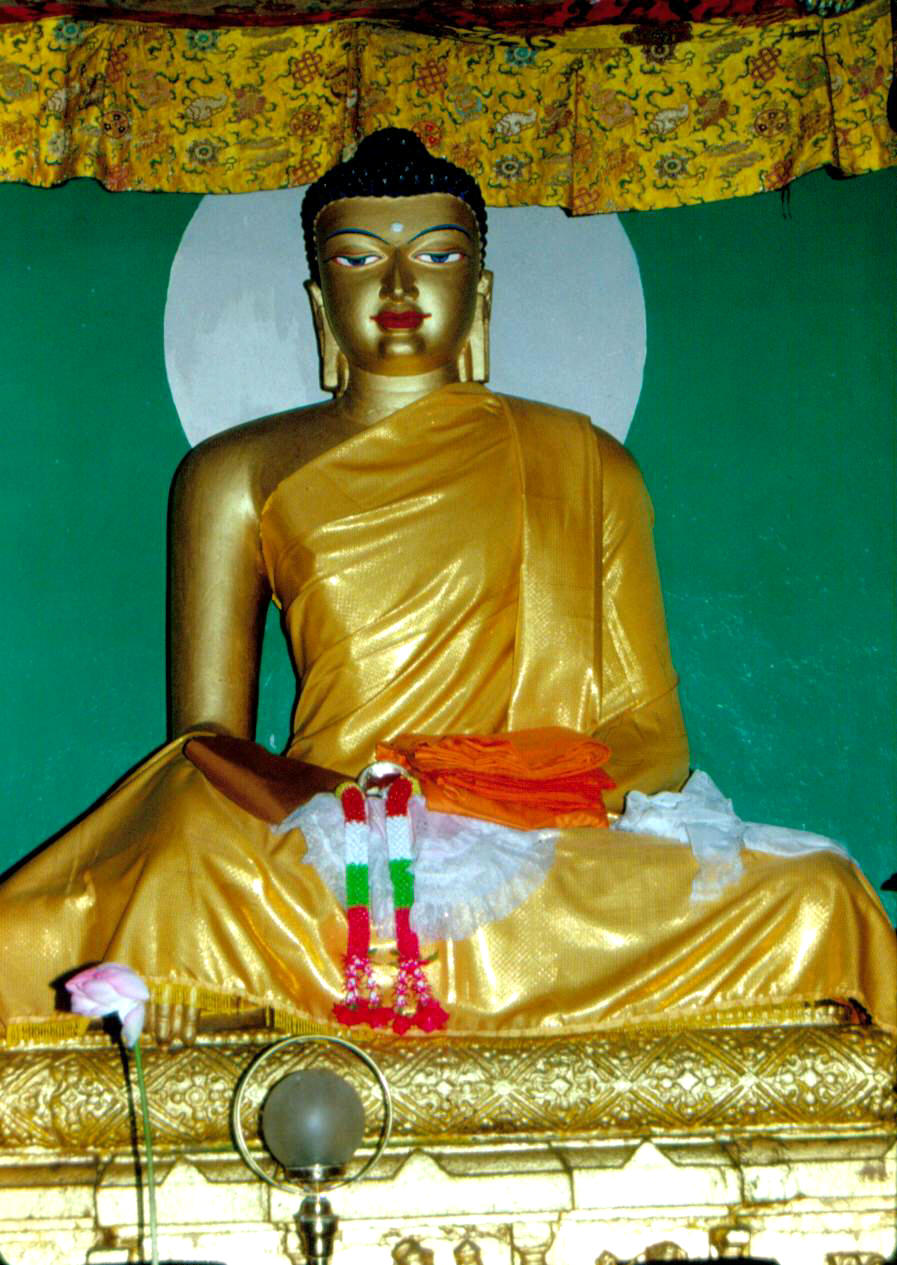 The present Bo tree is a direct descendent of the original tree that Buddha sat under in meditation when he became enlightened. 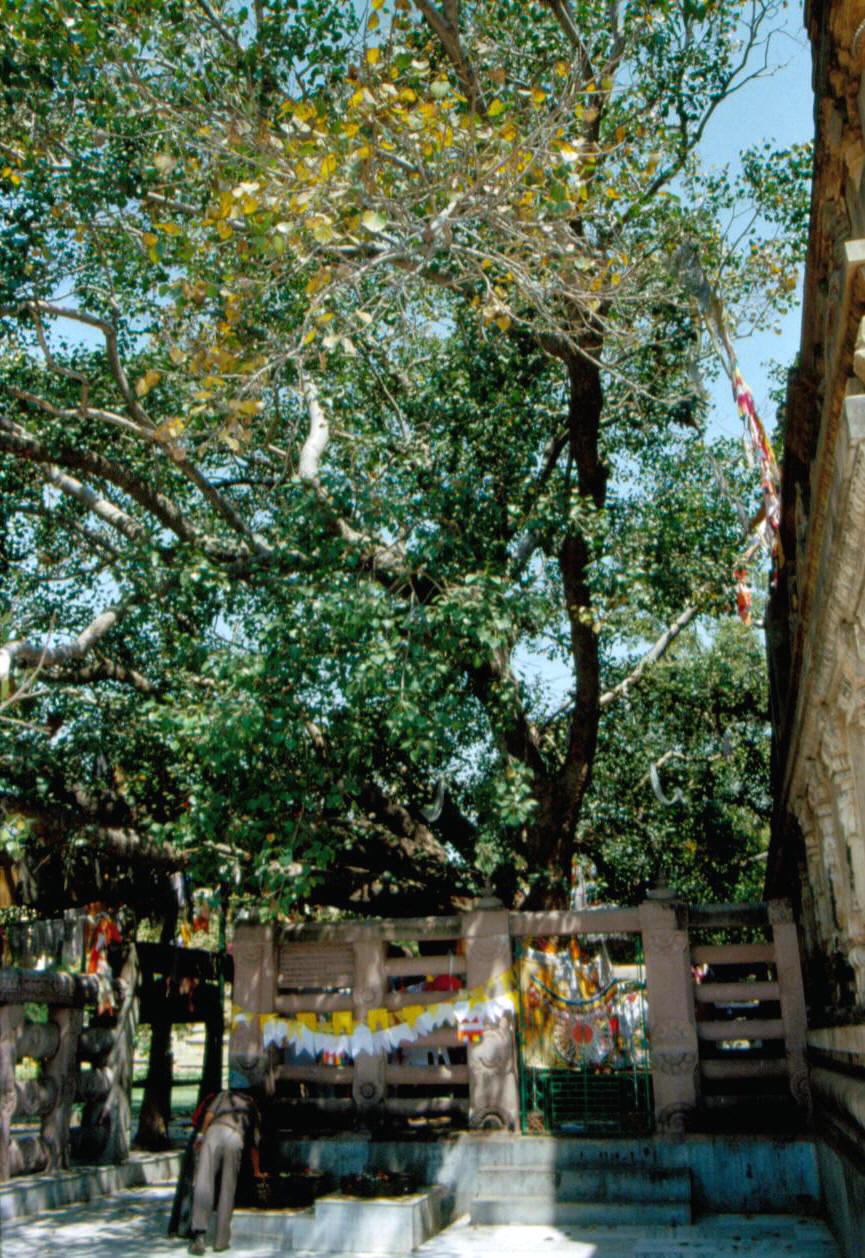 On the north side of the temple is a platform marking where Buddha walked in meditation. It has lotus markings on it which is said to show where he stepped during his walk. 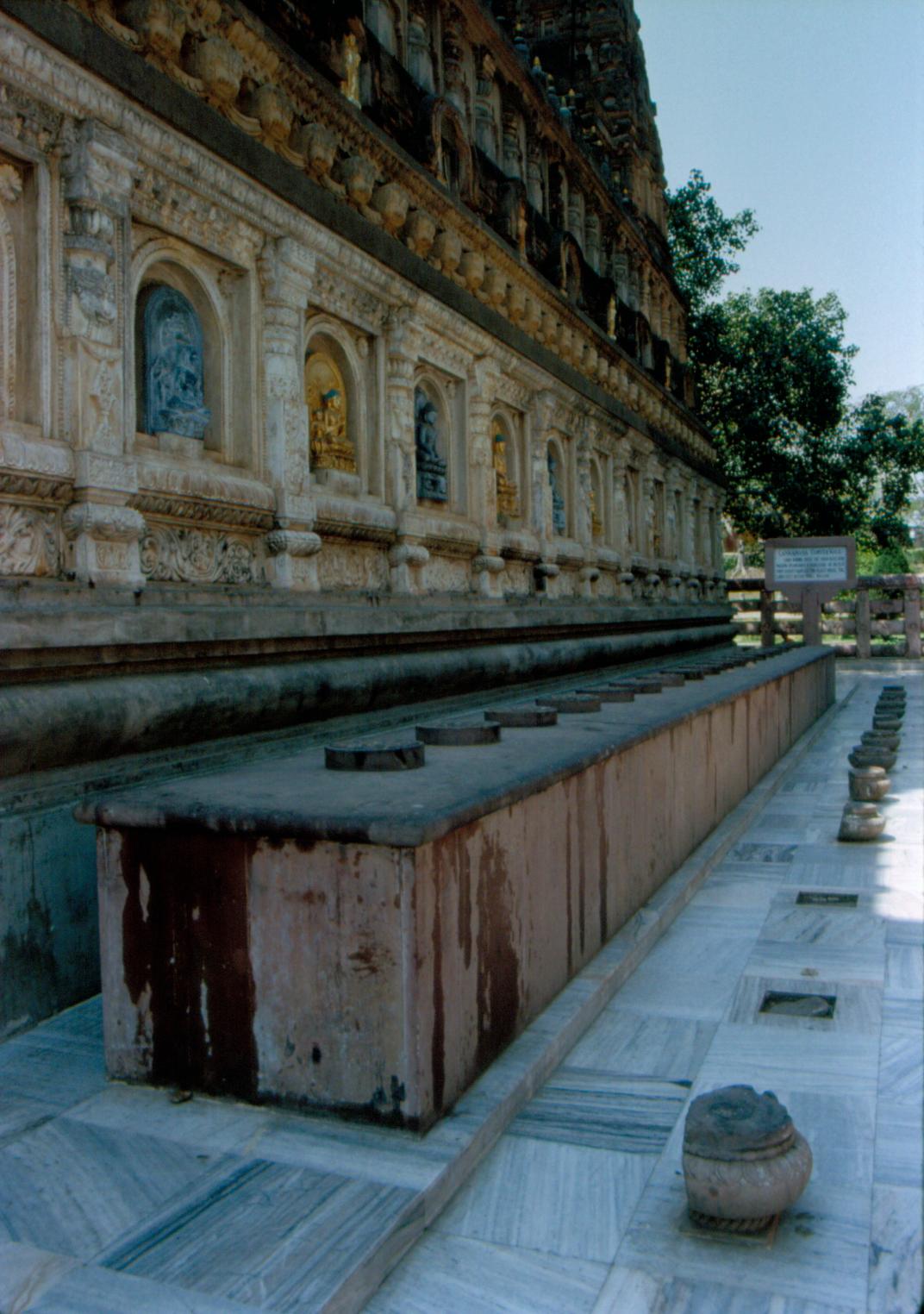 Behind the temple is a lotus pond that the Buddha was supposed to have bathed in. It is pleasant to take some time here and sit under the Bo tree or near the lotus pond and meditate on its significance. By the shoe stall are men who sell guidebooks that contain information on Buddha’s life. 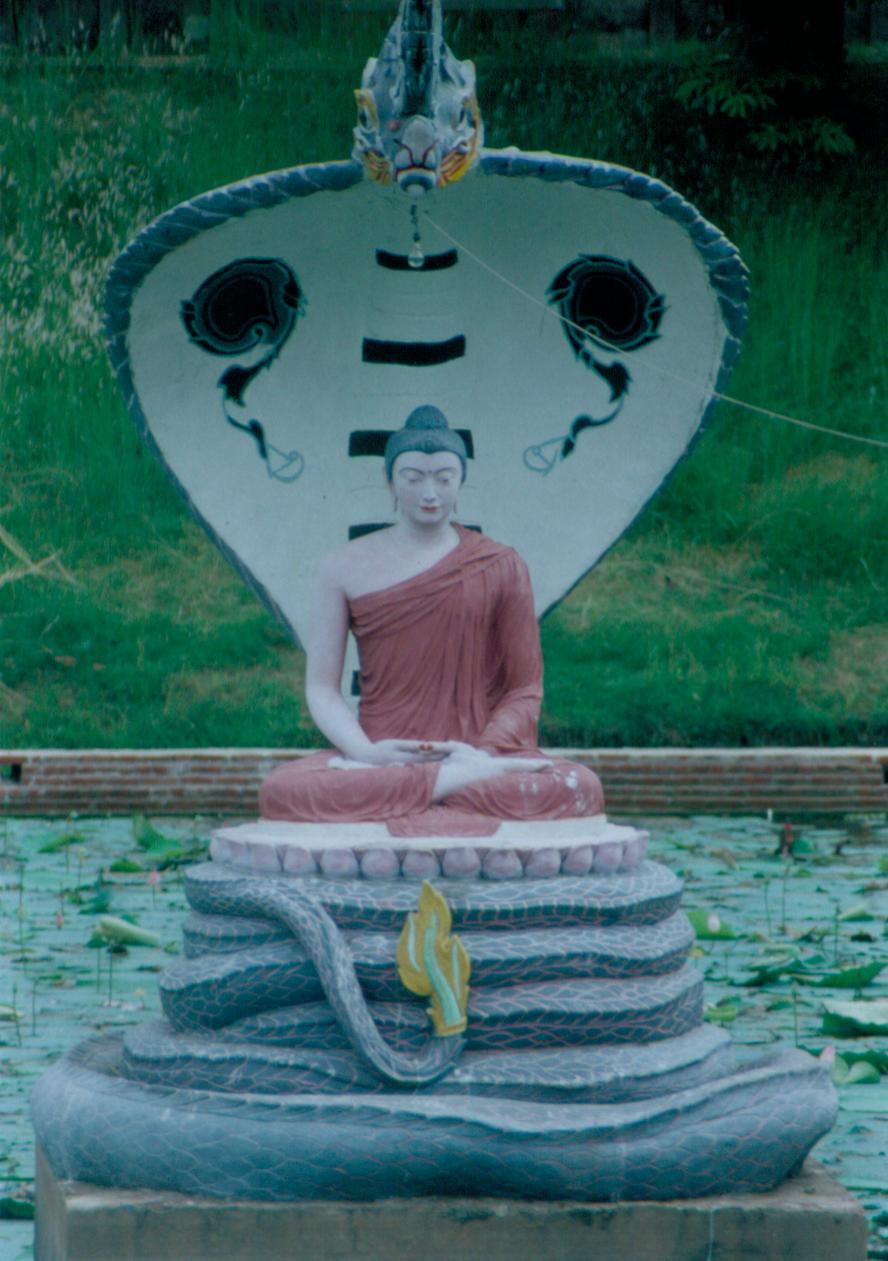 There are several monasteries and temples in this town, most of which are interesting to see, such as the Tibetan monastery with a large wheel of law; the Thai monastery built like a typical Thai wat  with a beautiful altar inside; and the Japanese monastery with a beautiful deity of Buddha from Japan. The active temples allow you to go in and watch the rituals and proceedings. Below is the altar inside the Bhutan temple. 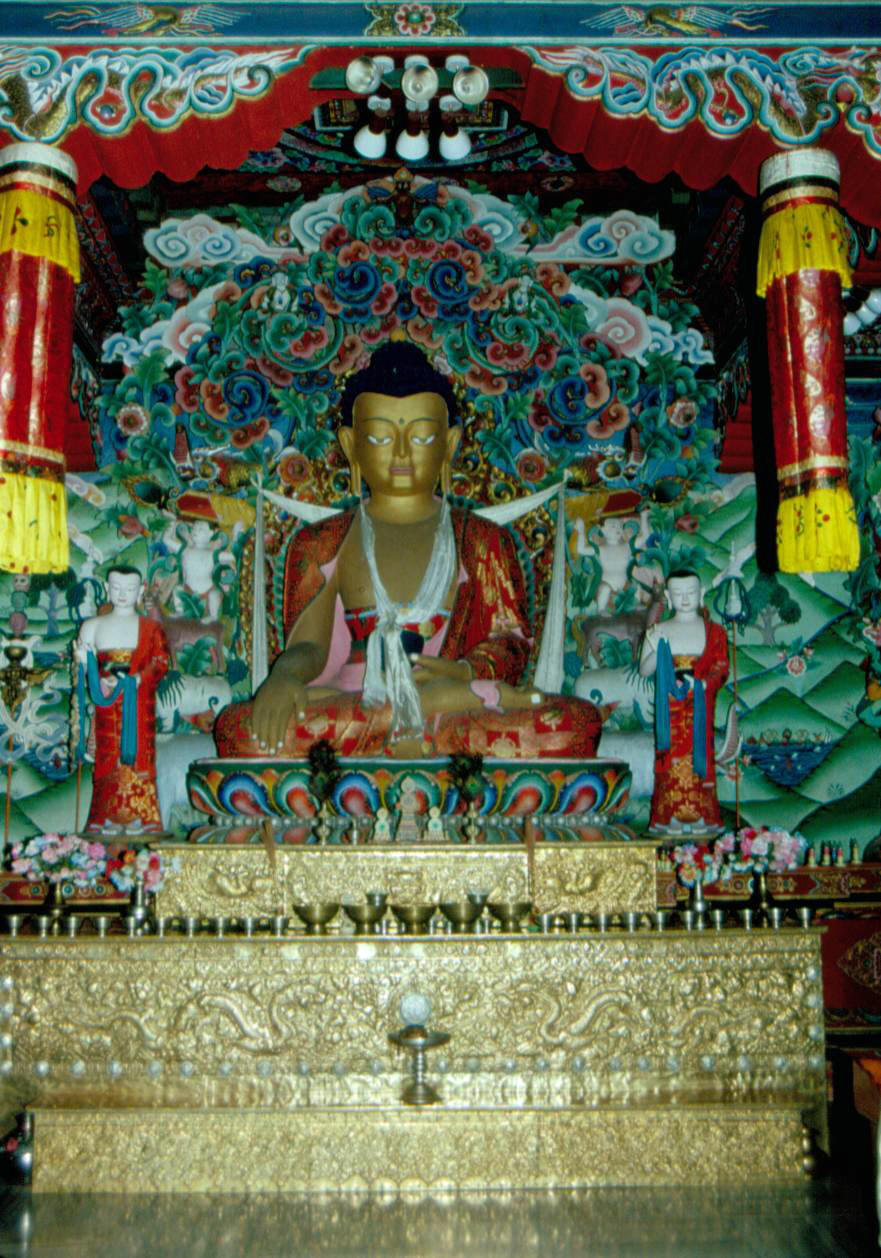 There are also regular conferences here that draw large numbers of Buddhists and monks from all over the world. 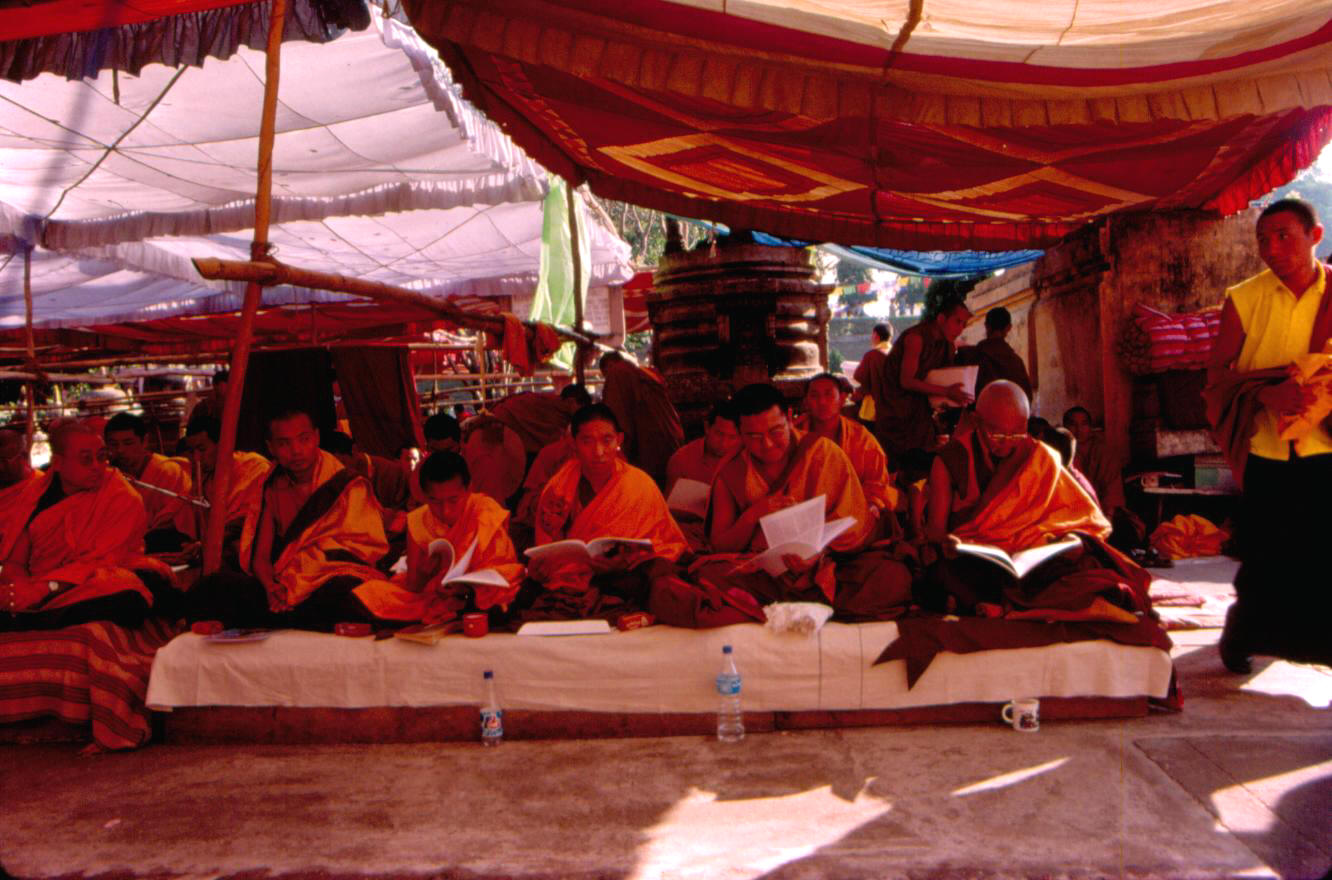 From Varanasi we catch a bus or a motor ricksha for a 10 kilometer ride to Sarnath. This is the place where Buddha, after having attained enlightenment in Bodhgaya, gave his first sermon about reaching nirvana through the middle way. Lord Buddha stayed for one rainy season here, but never made a permanent residence at Sarnath. Yet Sarnath became an important Buddhist center by the end of the fourth century B.C. when Ashoka ruled the area. It greatly flourished between the third and seventh centuries and was said to have as many as 1500 priests. During the 10th century the place declined and by the time the Muslims invaded in the 11th and again in the 12th centuries, it was practically destroyed.

As we approach Sarnath, we first see the Chaukhandi Stupa on the left which is the remains of an ancient stupa from the second or third century A.D. On our right is the Archeological Museum that has a nice collection of ancient relics from the area. Across the road from the museum is a Jain temple built in 1824 which contains images of Shreanshnath, the 11th Tirthankara of the Jains. Behind the Jain temple are the excavations of the old temples and monasteries. This includes the main shrine, Kumara Devi’s temple, and other things like the Ashoka Pillar, built around 250 B.C., which traditionally marks the site of Buddha’s first sermon. 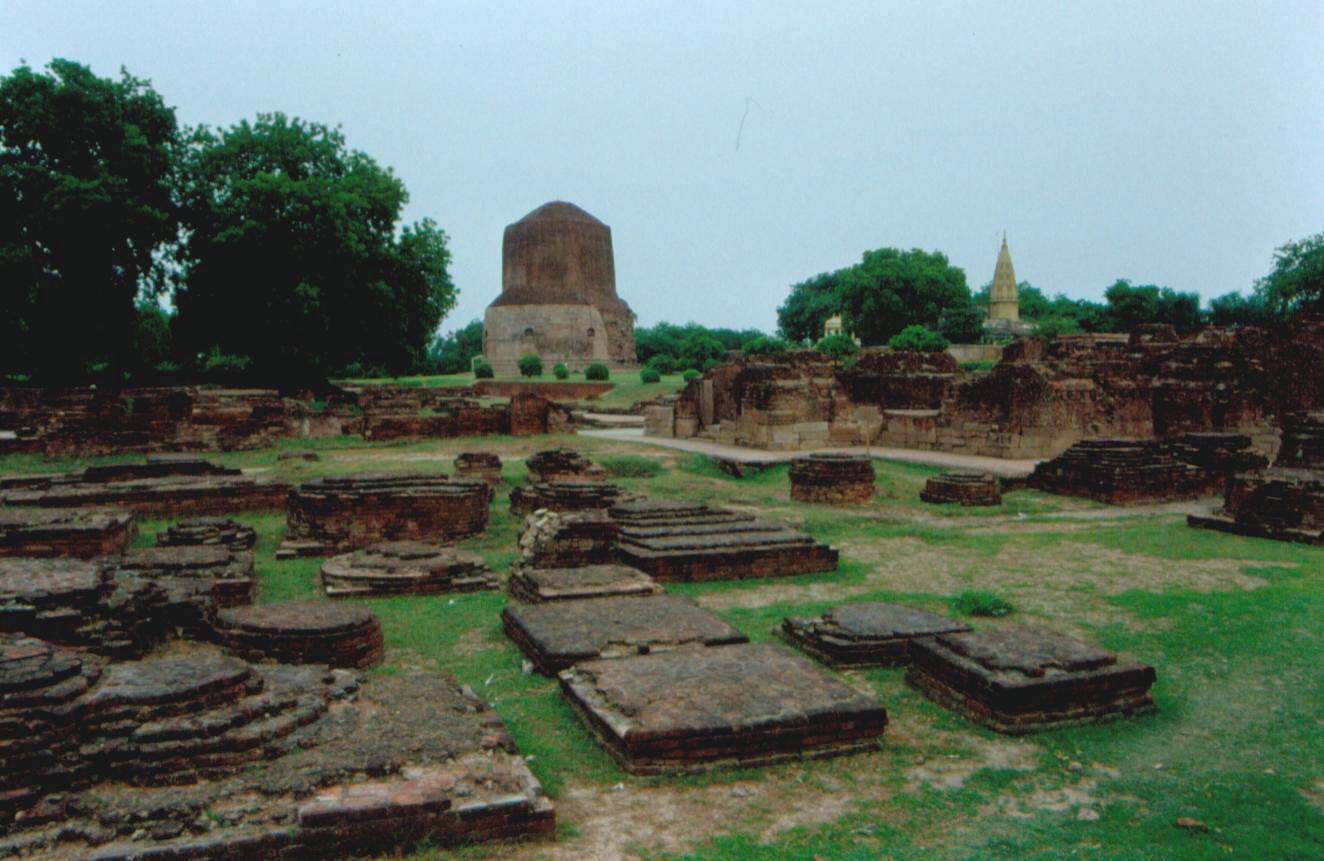 Near the Jain temple is the massive Dhamekh Stupa, built in the fifth century A.D. and stands 98 feet high. 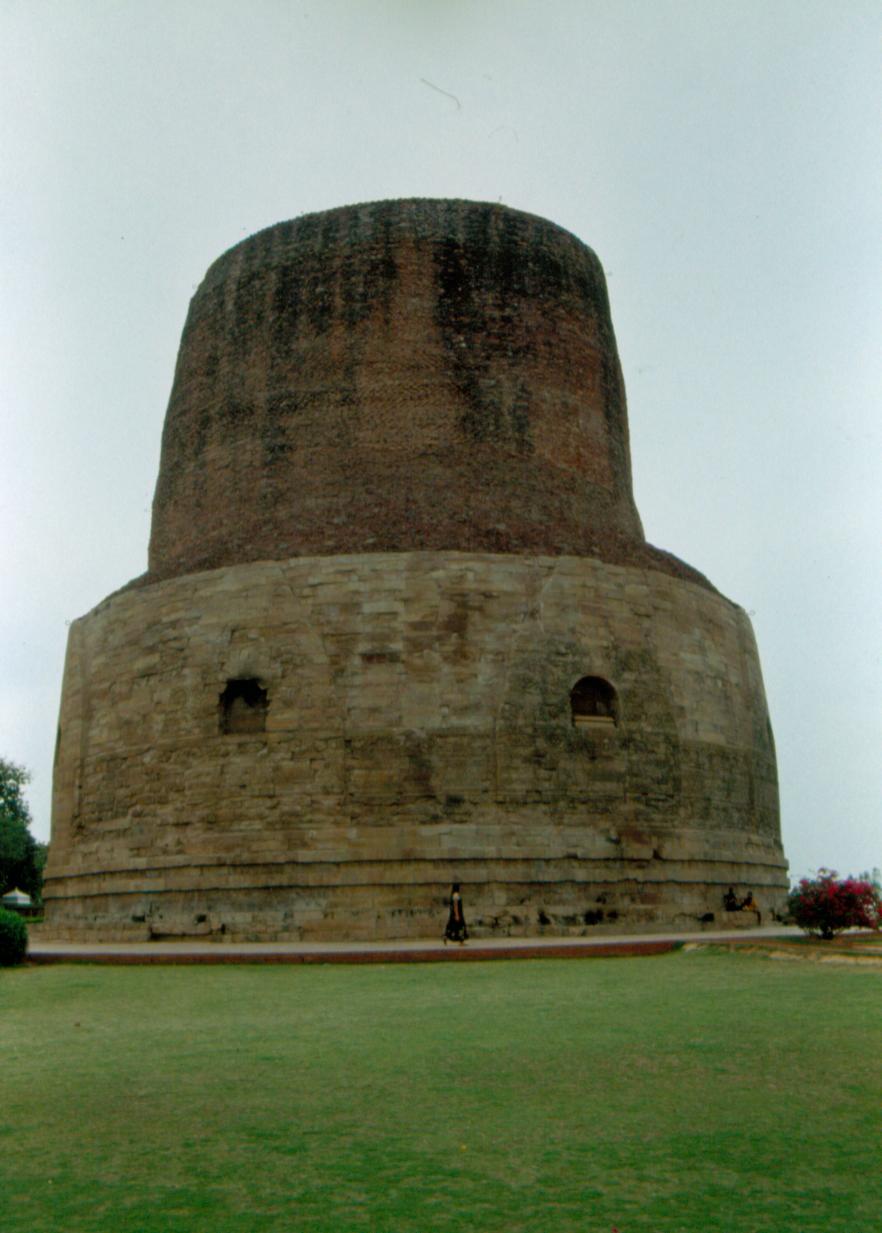 East of this stupa is the Mulgandha Kuti-Vihar, a modern replica of the Mahabodhi temple in Bodhgaya built by the Mahabodhi Society in 1932. Inside are very colorful murals of Buddha’ life, and a beautiful image of Buddha on the altar. 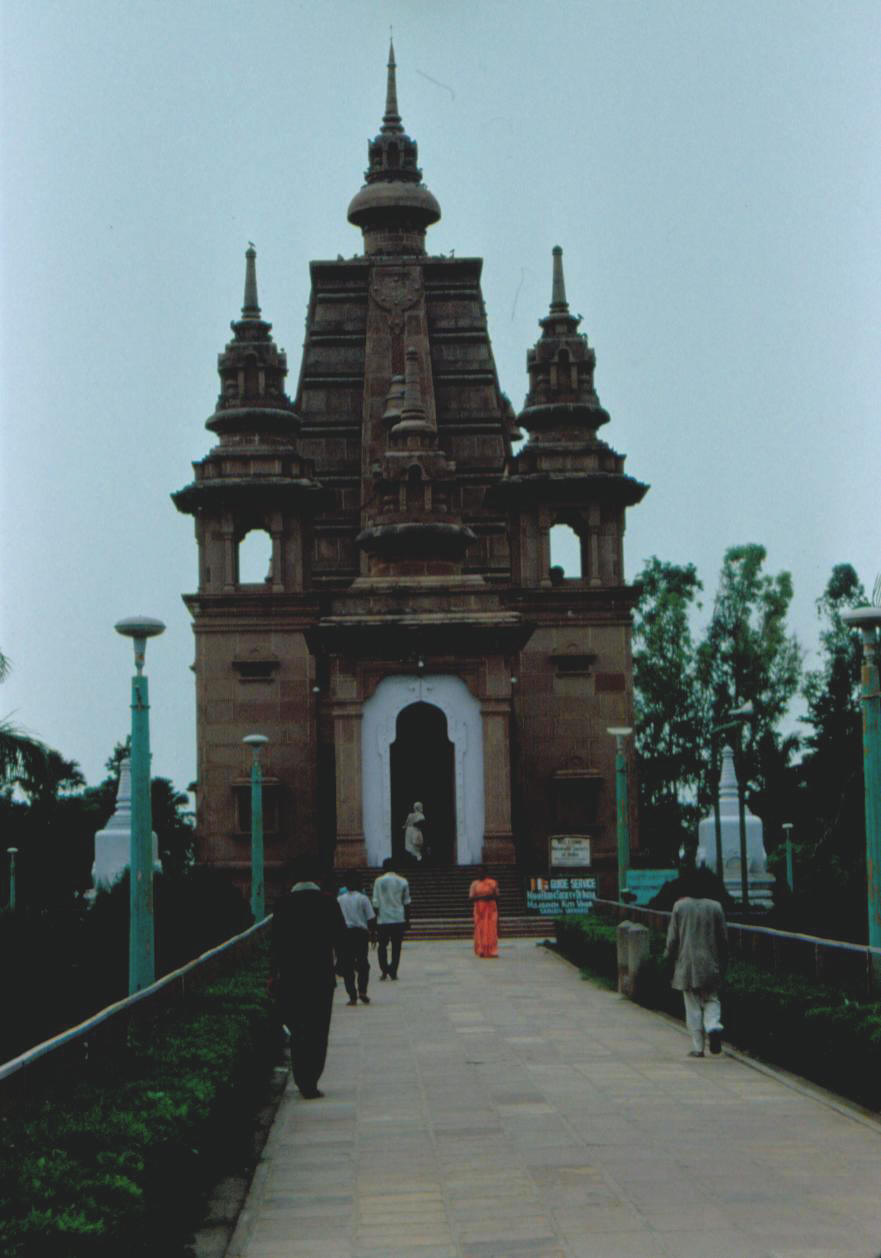 Next to the temple is a life size diorama exhibit of Buddha giving his first sermon to his first disciples under a Bo tree. This tree is a transplant of the tree in Sri Lanka which is a descendent of the original Bo tree that Buddha sat under when he became enlightened. Not far from here is the Chinese temple which contains a beautiful white marble Buddha. There is also a Tibetan Monastery at Sarnath. Everything at Sarnath can be seen in a few hours. 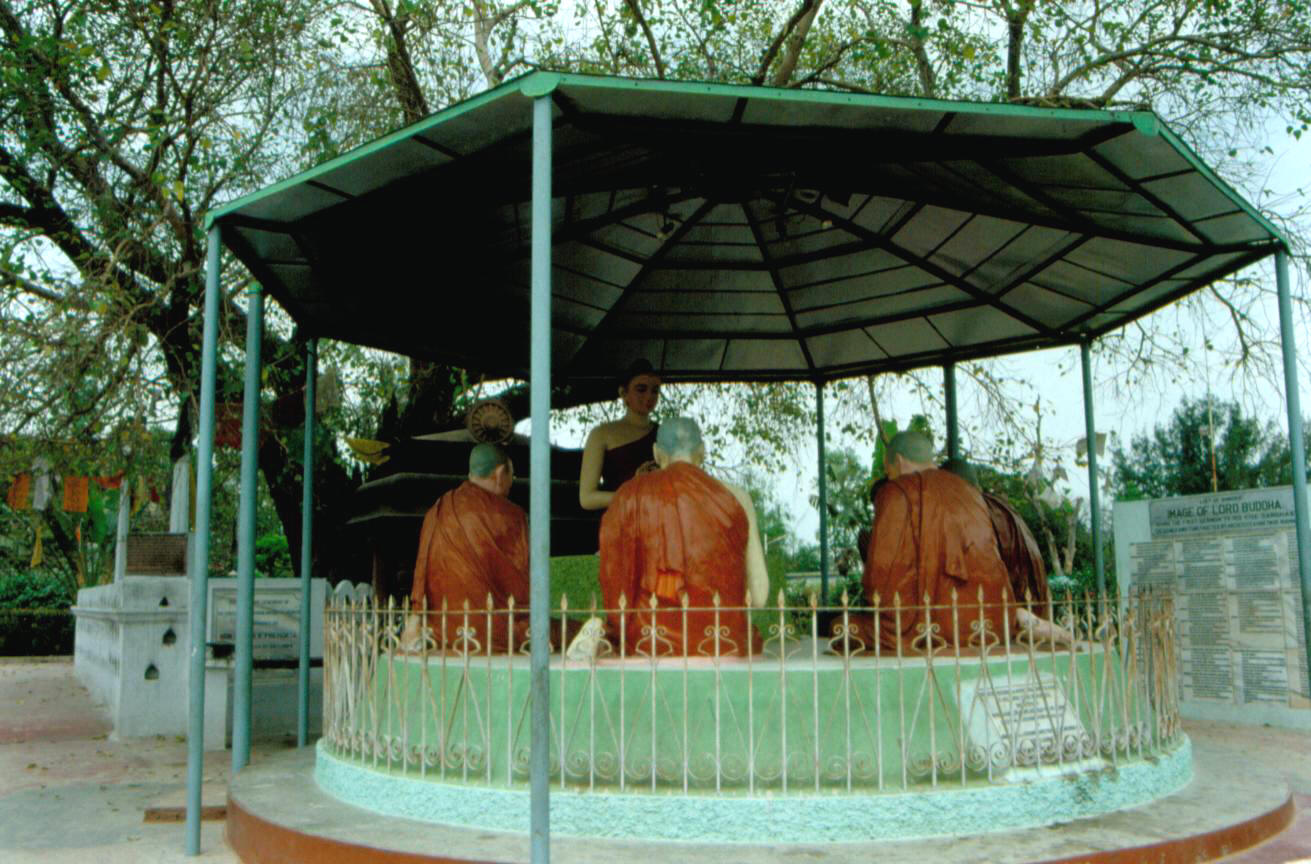 Kushinagar, the Place Where Buddha Left this World

Gorakhpur, the main city of the area, can easily be reached from Sitapur or Ayodhya, in case we did not want to venture to Naimisaranya. This town is named after the Shaivite yogi, Gorakhnath. Its main spiritual attraction is the temple of Gorakhnath, which is large and on a sizable piece of property.

Another of the main reasons why we want to visit this place is to see Kushinagar, which is known for being where Buddha left this world, thus entering Mahaparinirvana. Pilgrims will take an eastbound bus from Gorakhpur to Kasia 55 km away. You can get the bus at the stand near the train station. This is why when staying in Gorakhpur, it is best to stay in a hotel across from the train station for ease of making travel arrangements. Buses to other locations can be had at the Katchari bus stand 1 km south of the train station. You can also take a taxi if you want, which is more convenient since the bus drops you off, but the taxi will continue to take you to the various sites or temples you want to see and bring you back whenever you are ready. It is a one-and-a-half hour ride there.

Once you arrive in front of the main temple, you make your way in through the gate and down the sidewalk to the Mahaparinirvana Stupa. This is considered to be the place where the Buddha left his body. Actually, I was told that there are two Sarasa trees in front of the shrine and between them is the actual spot where this happened. Anyway, the present shrine has been reconditioned and looks much nicer than it did. Here we take the path as it is seen in the early morning fog. 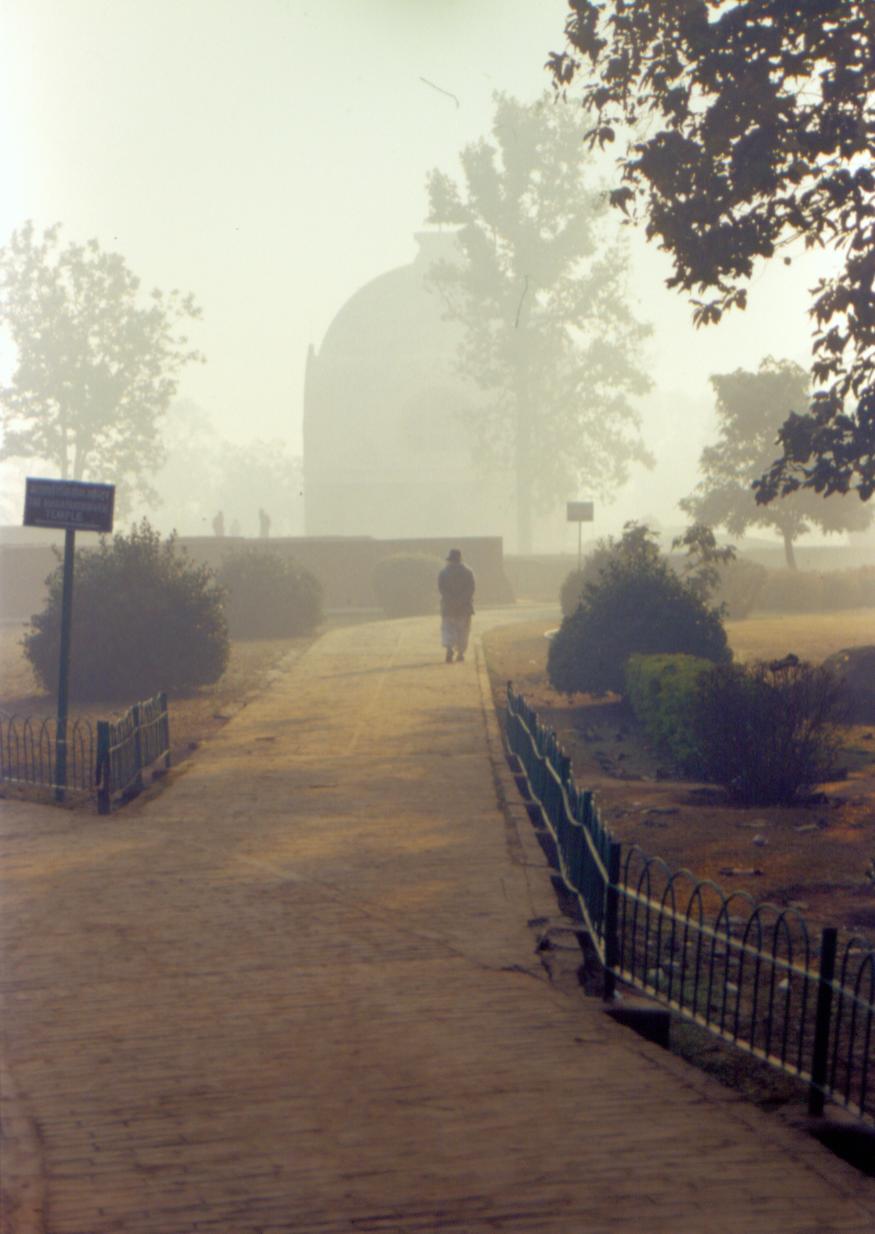 The front building is made in a half-barrel design, and has an image of Buddha reclining in the position he was supposed to have taken when he passed from this world. Behind this building is the Mahaparinirvana Stupa which commemorates the place where the Buddha left his body. It was here that Buddha selected as the place of his passing after having announced his approaching disappearance three months in advance to the person called Ananda. The stupa originally dates back to 413-55 B.C. but was rebuilt in 1927 by the Burmese. However, the present structure is a new outer building that houses the older stupa inside it. Around the area you can see the ruins and foundations of a few old monasteries that are being excavated. 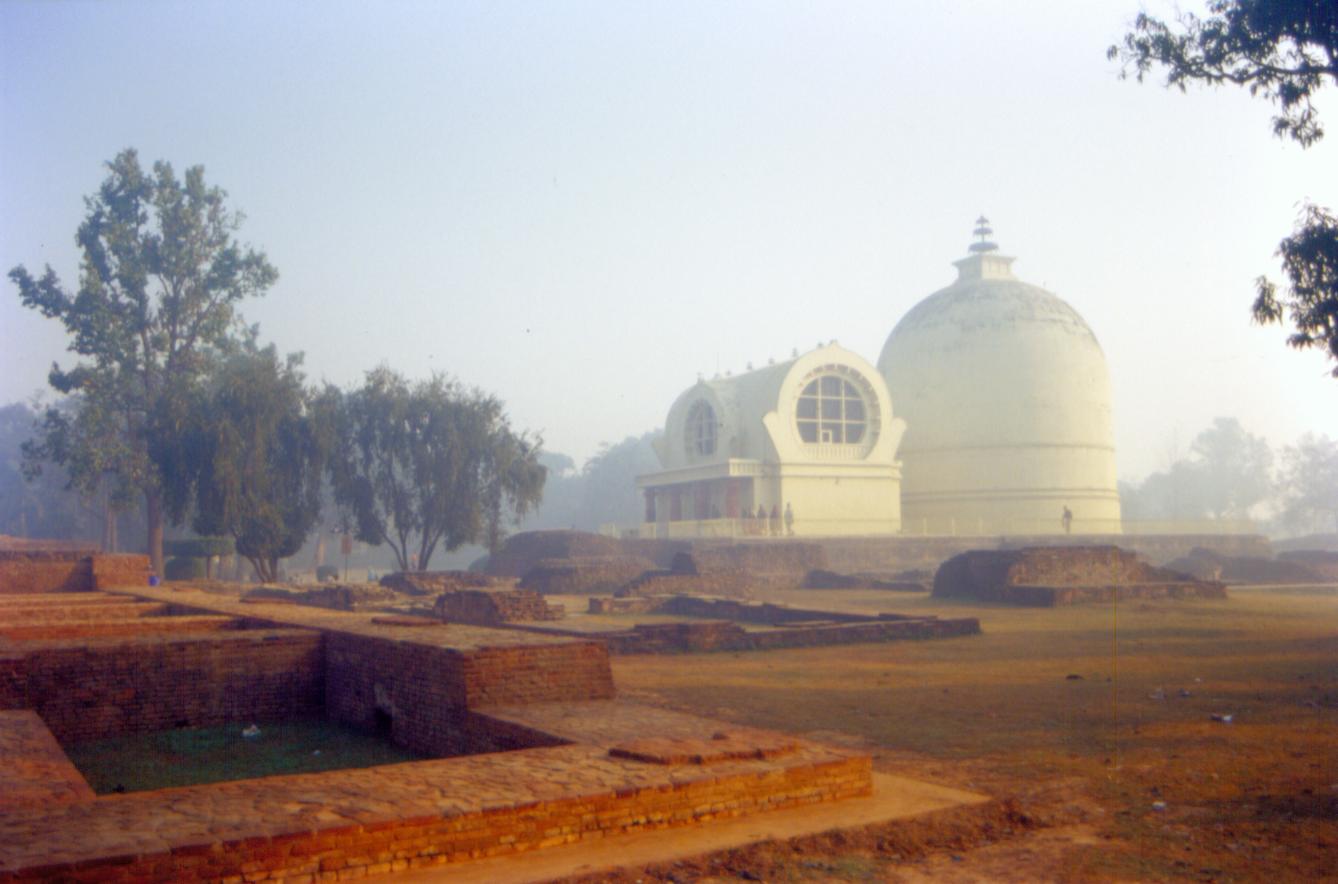 The image of reclining Buddha is carved out of one piece of chunar stone and measures 20 feet in length. 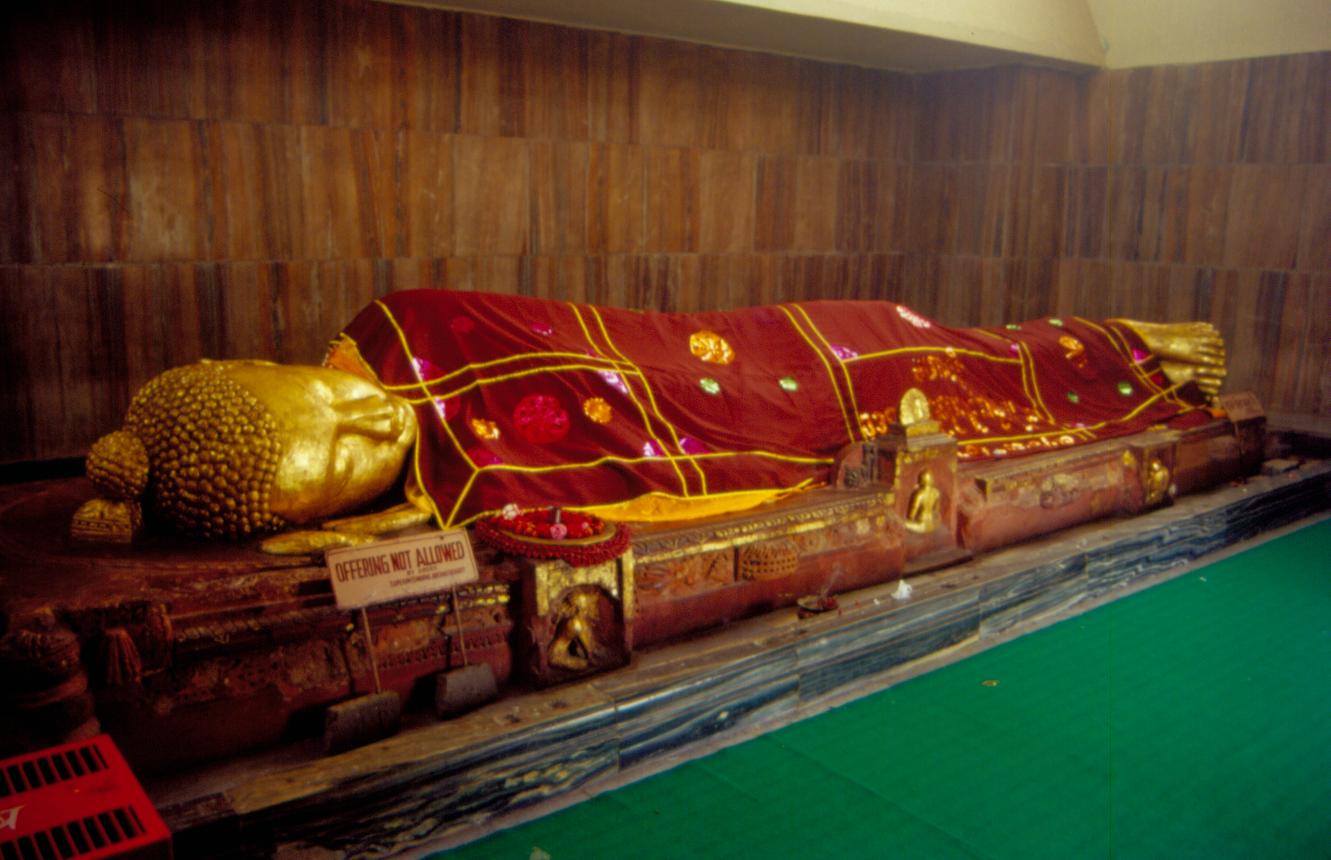 About three-quarters of a mile away there is also the old brick Ramabhar Tila (or Angara Chaitya) that is said to mark the spot where the Buddha’s body was cremated. It is said that years ago vandals bore into the stupa to steal whatever valuables they could find. Through this passage the bottom of the stupa can now be reached where one can still see the scorched earth, thus confirming that this was where the Buddha was cremated. 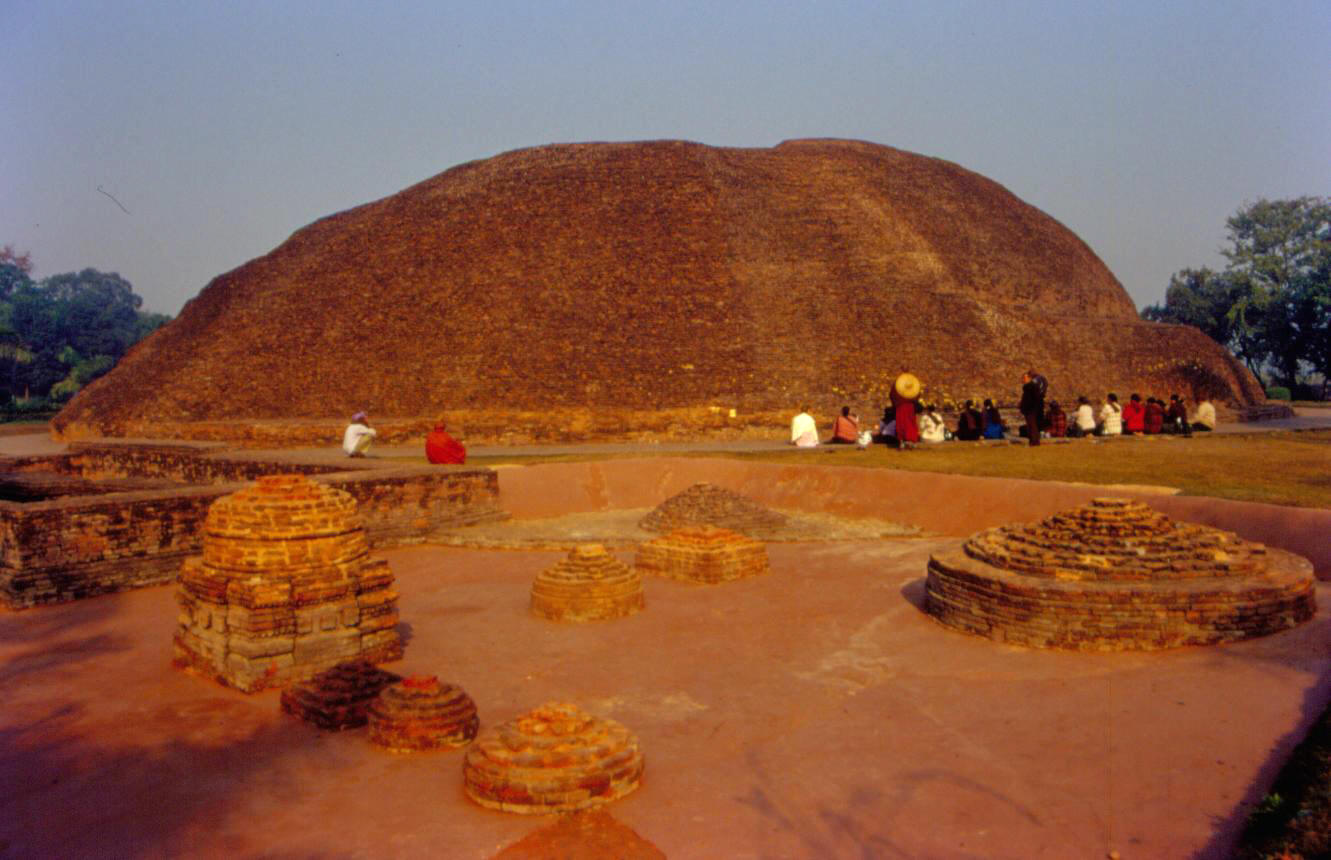 Nearby and along the main road are other modern monasteries that you can visit, such as the Thai, Burmese, Japanese and Chinese temples. They are quite lovely and ornate, and have images of the Buddha, some of which are quite large. Below is the beautiful Thai temple. 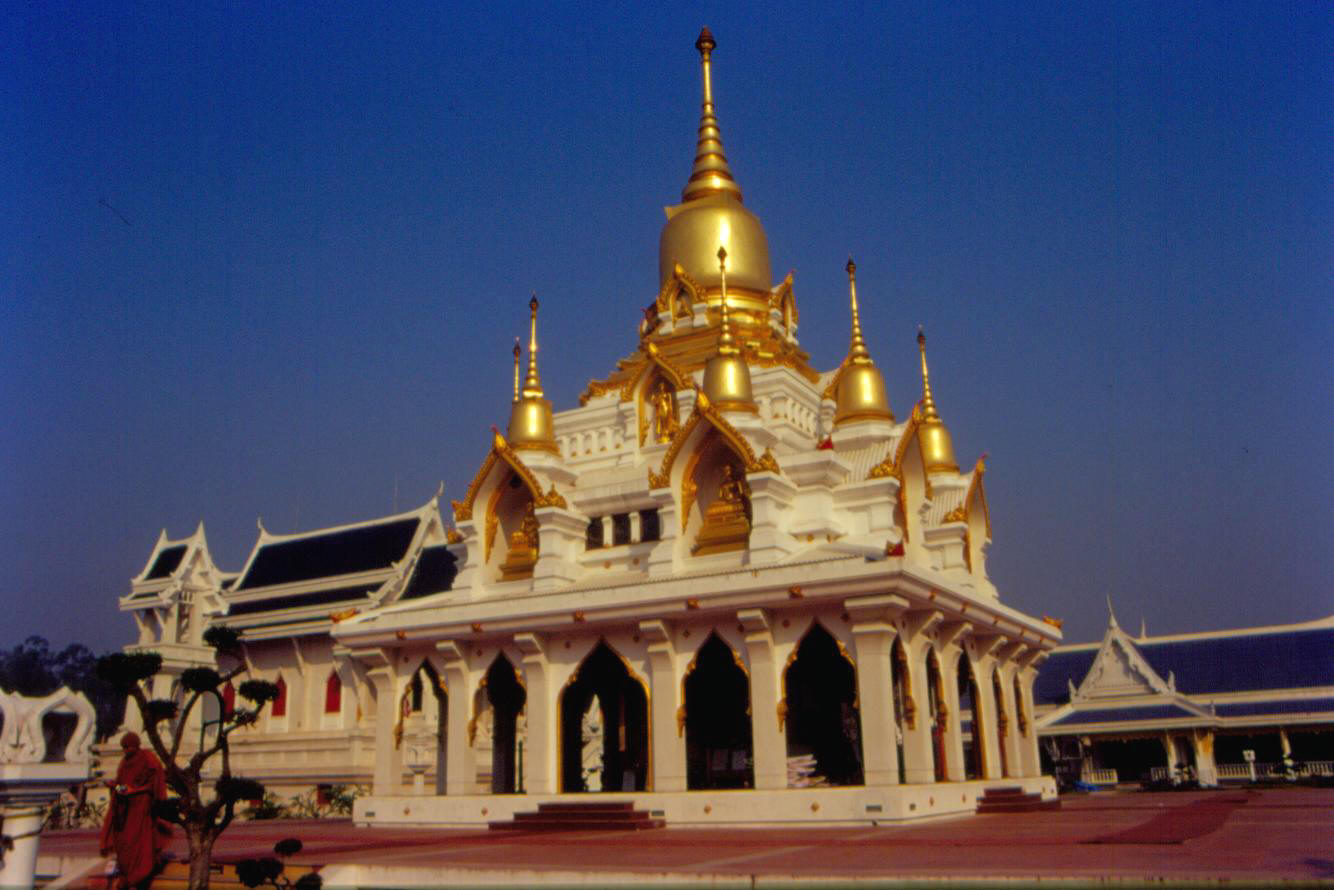 You may also want to read the article Buddhism and Its Vedic Connections.

[This article available at www.stephen-knapp.com]